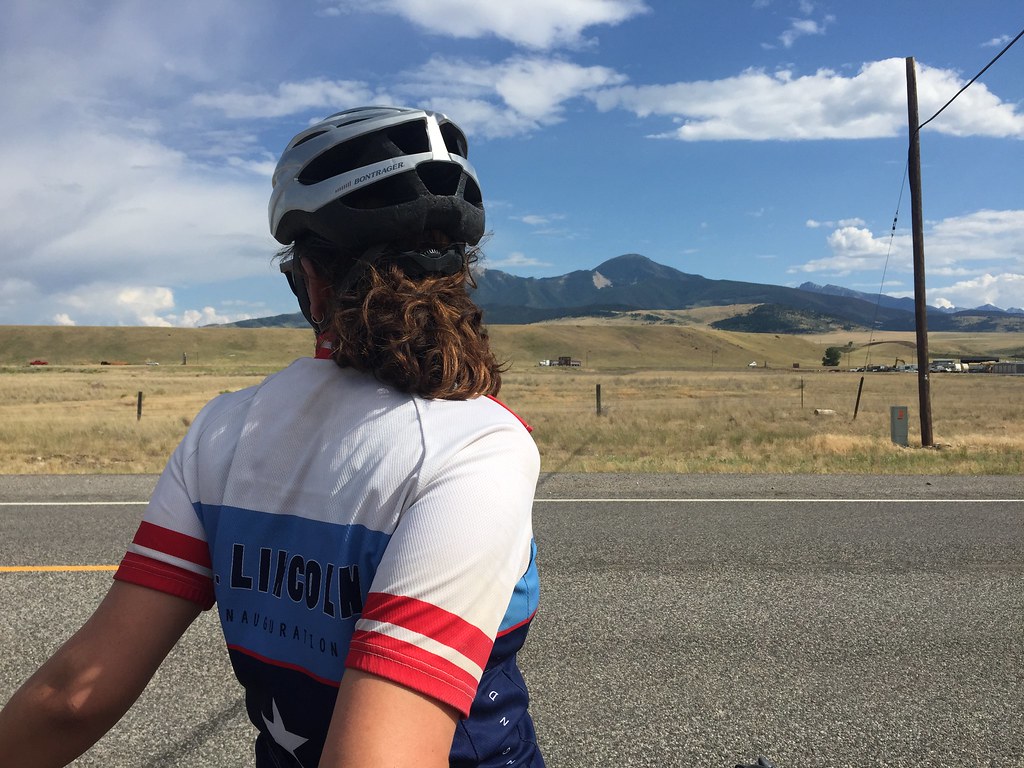 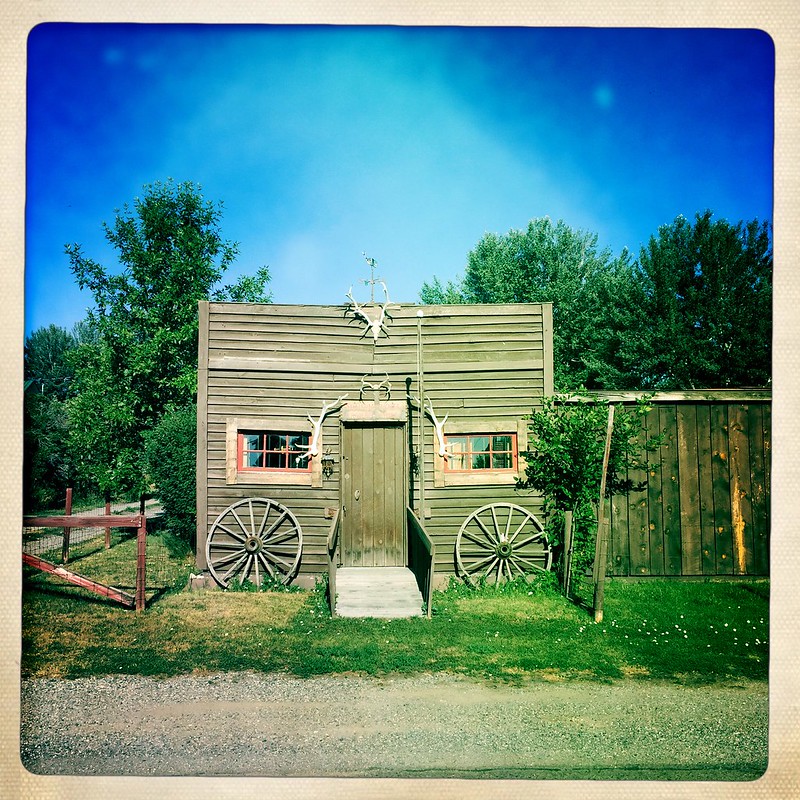 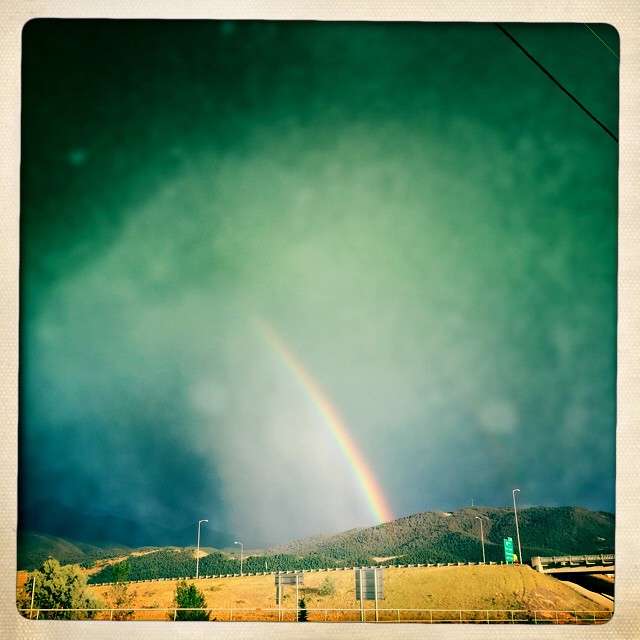 Day 30, July 20
80 miles Livingston, MT
Today was a nice start and no wind. It’s amazing how much wind plays a factor in travel in the west. This must have affected people over a hundred years ago as well as movement under human power is what we share. A trip for us can double or be halved in time due to wind direction. We have begun to look at distance as a relationship to time instead of mileage. We are following the Bozeman trail now through central Montana at this point. This was a 19th century shortcut to the Oregon Trail and the western gold fields of Montana. This trail also ended up cutting across Sioux hunting grounds and the resulting bloodshed seemed inevitable. Red Cloud led a 6 year campaign to stop this invasion and eventually the U.S. shut the trail down in 1868. Moving further west, we approach higher elevations and are shadowed by the Absaroka Mountain Range as we pull into Livingston. 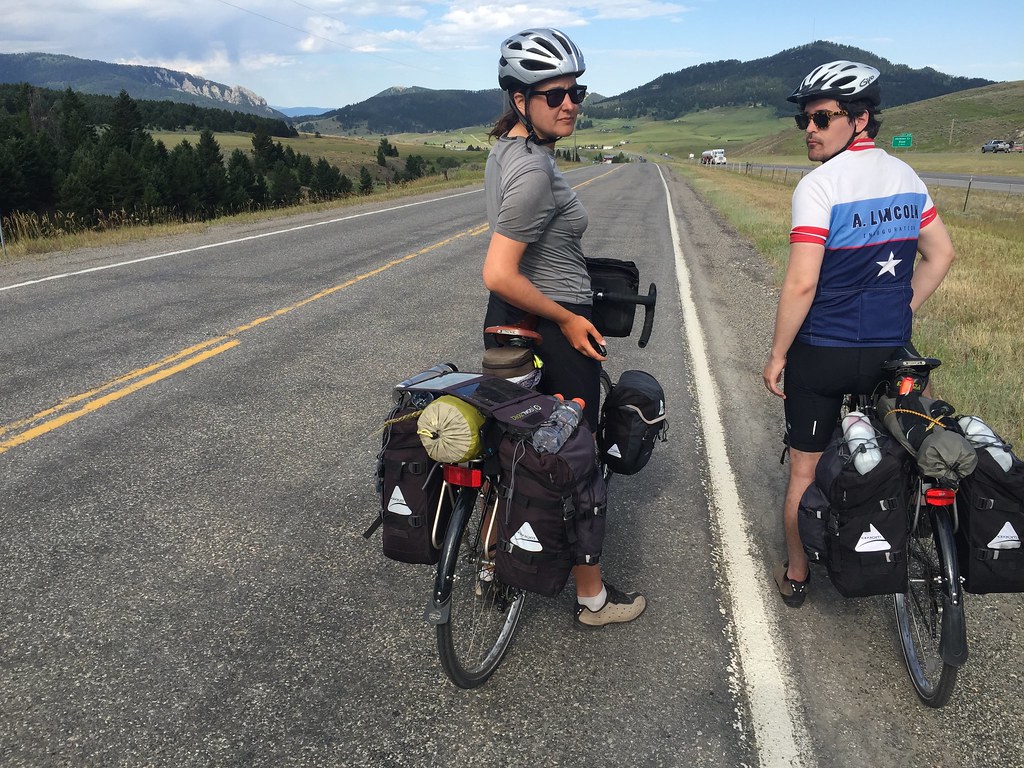 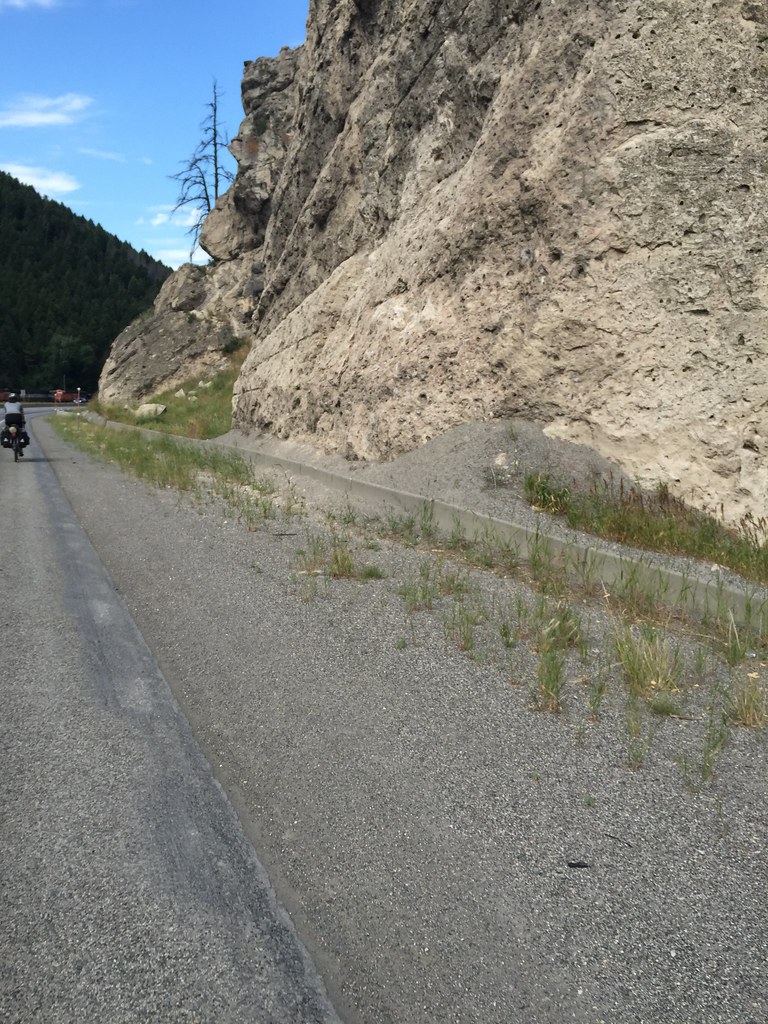 Day 31, July 21
23miles, Bozeman, MT
Today we crossed Bozeman Pass. This is the route that Sacajawea used to lead William Clark over the pass and on the return trip from the Pacific Ocean in 1806. He later joined Captain Lewis after exploring the Yellowstone River and joining him at the Missouri River to return east. This was an old buffalo trail that Sacajawea led the Corps of Discovery through and probably should be named after her. Bozeman was a later arrival and this route was initially intended to be a short cut to the Oregon Trail and a trail from Ft. Laramie, Wyoming to Virginia City, Montana to the western gold fields. This route however traversed traditional hunting lands of the Teton Sioux and trespassing violations lead to Red Cloud’s wars. For six years attacks and violent losses of native and settlers led to the closing of this trail by the U.S. Government in 1868. We set a survey market at the pass to mark this as another space of remapping a territory of healing and tolerance. 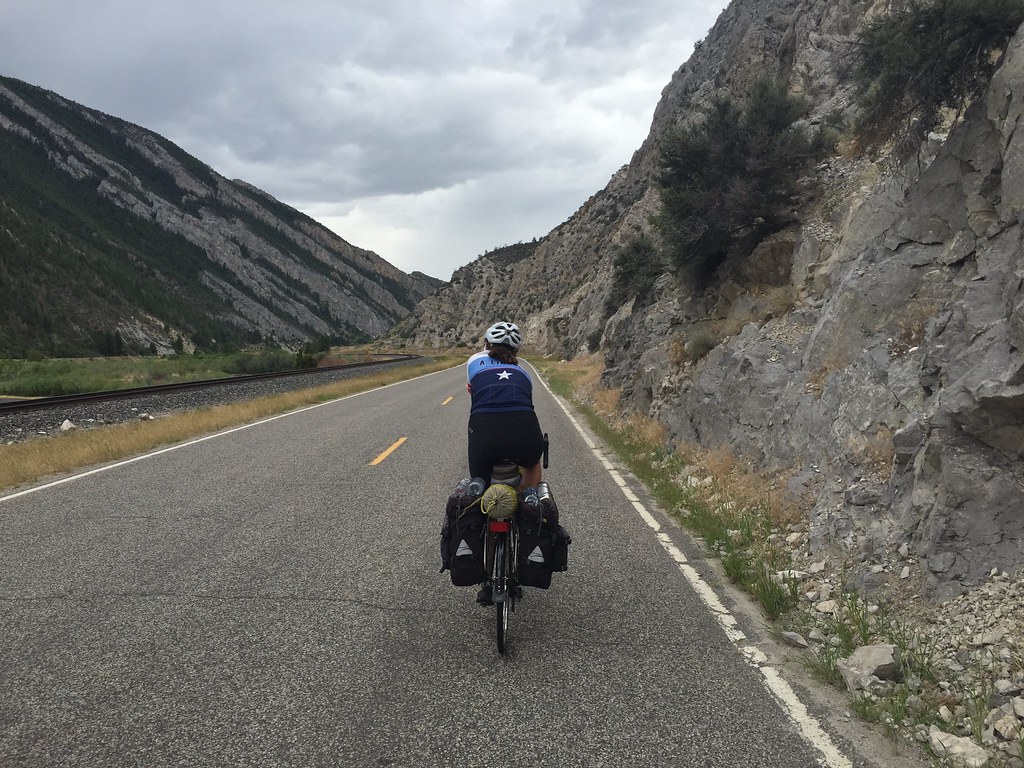 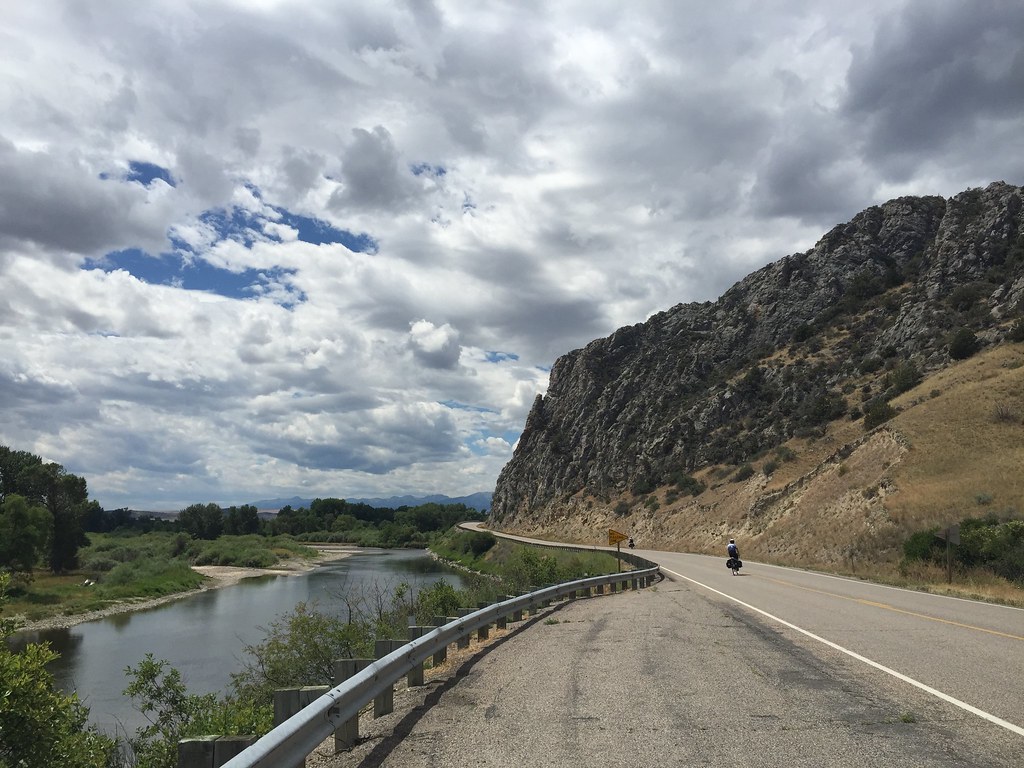 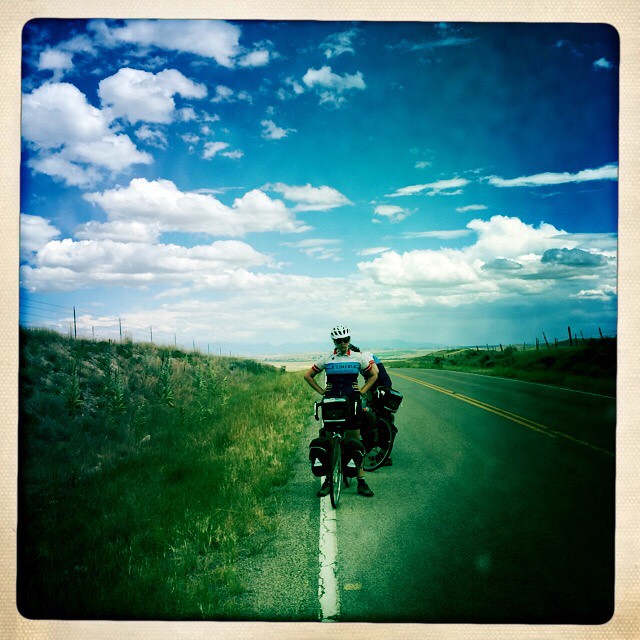 Day 32, July 22
70 miles, Whitehall, MT
Our morning run went quick and the weather was overcast and cool. Our destination was set for Three Forks but we arrived early so we decided to push on to Whitehall. At Three Forks, three rivers join to form the Missouri River to the northeast. The one fork to the southwest that was named by the Corps of Discovery after President Jefferson was the route we followed towards Whitehall. The Jefferson river here cuts through deep canyons walls and is very dramatic and windy. In this area, the Corps went searching for Sacajawea’s tribe but ended up camping along the banks not far from LeHood. All throughout this route we have had to watch for falling rock. The views here are incredible. The area is remote and seems to be in a huge valley surrounded by a rim of mountains. While moving through the mountain corridor, we happened to notice a massive eagle’s nest with two huge birds sitting right above us. By extending this day, we will make our higher elevation days shorter and easier when we have to do a lot of climbing.

Day 33, July 23
53 miles, Dillon, MT
Today was a rainy start and all morning it was overcast and threatening to rain. The cool conditions however was wonderful. The landscape and mountains have so many faces with the changing weather. Sometimes the area looks as though we are in New Mexico and when cloud cover moves in I could swear we were in Alaska. As we move south along the Jefferson River we are following Lewis and Clark’s return scouting trip. They were searching for the Shoshones around the location of Beaver Rock on the route we traveled through today. Their mission was to trade for horses in order to travel overland in the winter. Sacajawea was kidnapped by the Shoshone and she knew this territory as she guided the Corps of Discovery along some of the buffalo trails. We moved quickly through this area today and got one day ahead of schedule. This will help us tomorrow as we have to cross two passes over 6000′. The day after tomorrow we cross the Continental Divide and move back and forth between Idaho and Montana. 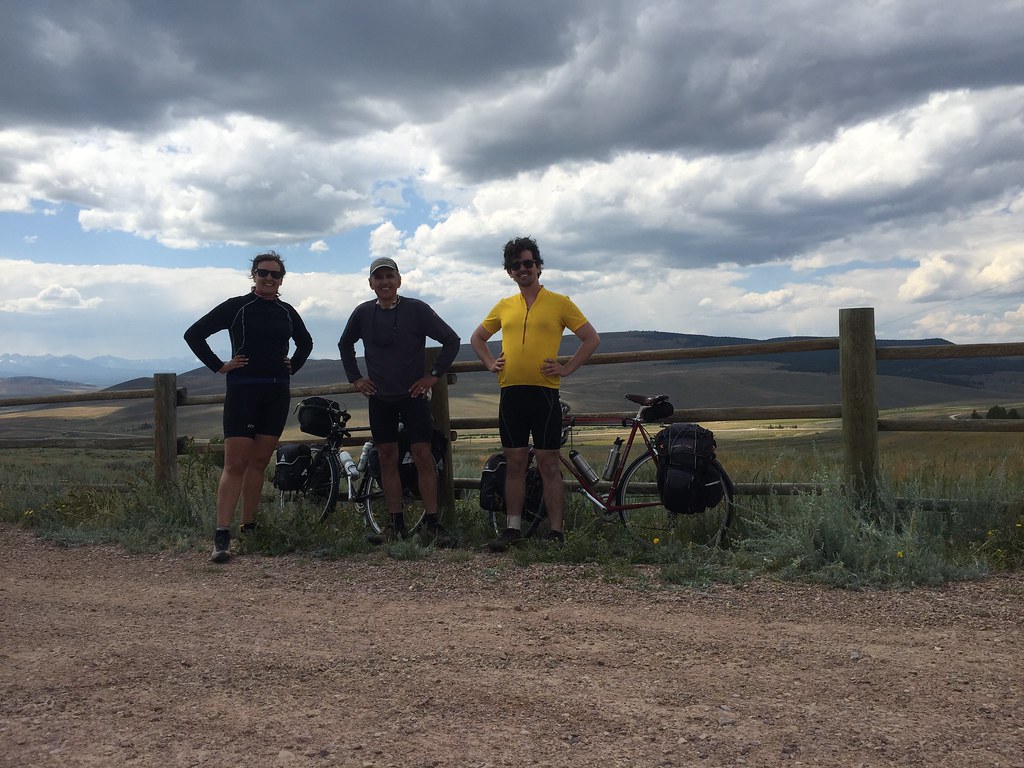 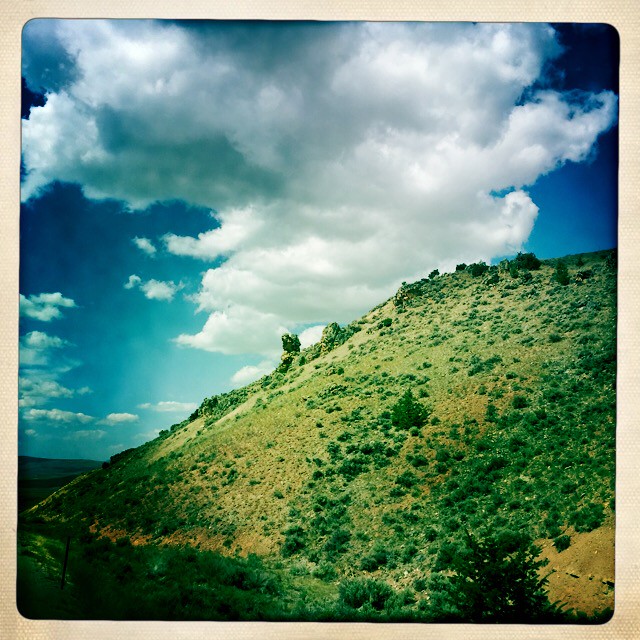 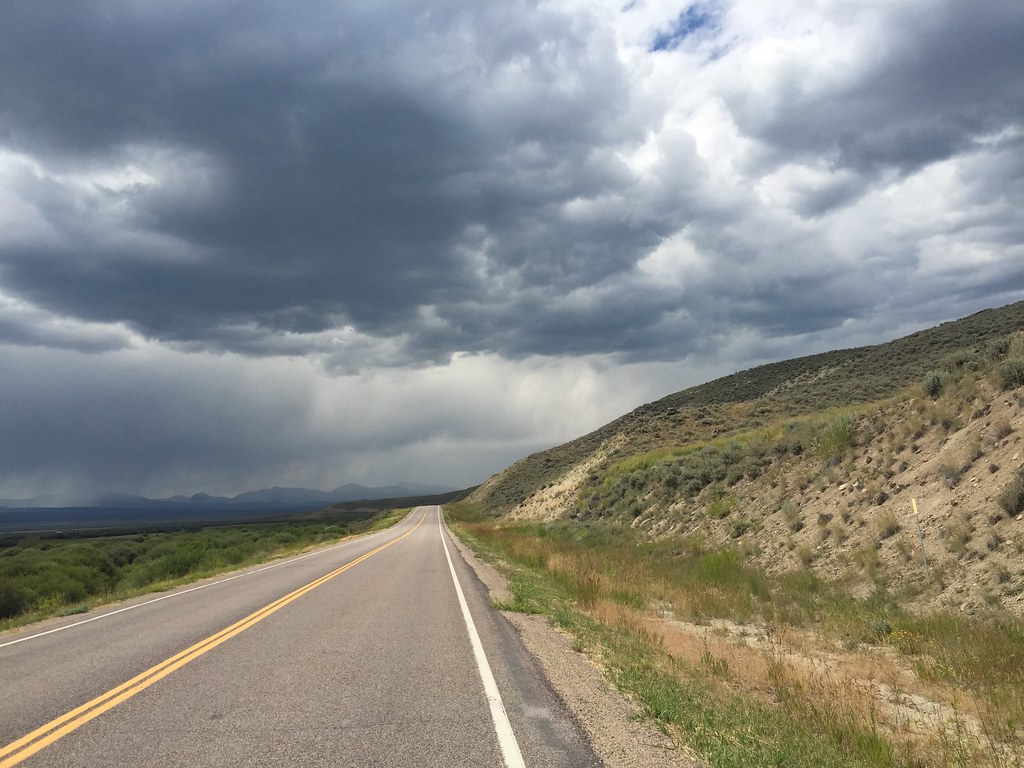 Day 34, July 24
48miles, Jackson, MT
Right now we are in Grizzly Bear country. Last night was 40 degrees which made for a very cool night of camping. Beaver Creek flowed not far from our site and we got to bed early. All of the rivers and streams we pass look like excellent trout streams and they are very clear. Today we got a little later start and waited for it to warm up a bit. We had to climb 2 passes on our route and the second one was 7400′. That required the big effort. The going is pretty slow but the vistas are amazing. Spending a couple of hours on an uphill climb yields a quick descent of minutes to go 10 miles. I am also extra careful on these and they make me nervous carrying all our weight. It is easy to get going up to 40mph without much effort but I like to go not more than 17. It is a bit disheartening to descend 1500′ however knowing we have to repeat that climb later in the day. The landscape is very remote and epic here. The spaces are vast and distant. This is not an intimate space with trees or rock outcropping but massive distant open expanses. When Nasa talks about the Martian surface with canyons several miles deep,- this is the space that could comes to mind. When I start on a descent it almost feels like the view is from an airplane.

At the top of Big Hole Pass a type of lily grows in the endless high country range that Sacajawea actually showed the Corps of Discovery how to harvest its roots. This knowledge actually kept them from starving to death in this harsh landscape. As we descended the pass into Jackson following the Big Hole River, we discover an unexpected hot springs and not to my surprise,- Sacajawea happened to have led Lewis and Clark to this spot. The town of 38 people today has a great outdoor mineral hot bath that we all jumped into at the end of the day. The amount of aid that Sacajawea gave to Lewis and Clark is phenomenal. All of the back country and remote locations in Montana have historic markers that point out the Lewis and Clark route and inevitably all the critical information that Sacajawea lent to the Corps. Her incredible contribution to Lewis and Clark, in my opinion, should rate a greater deal of recognition and honor in the legacy of American history. 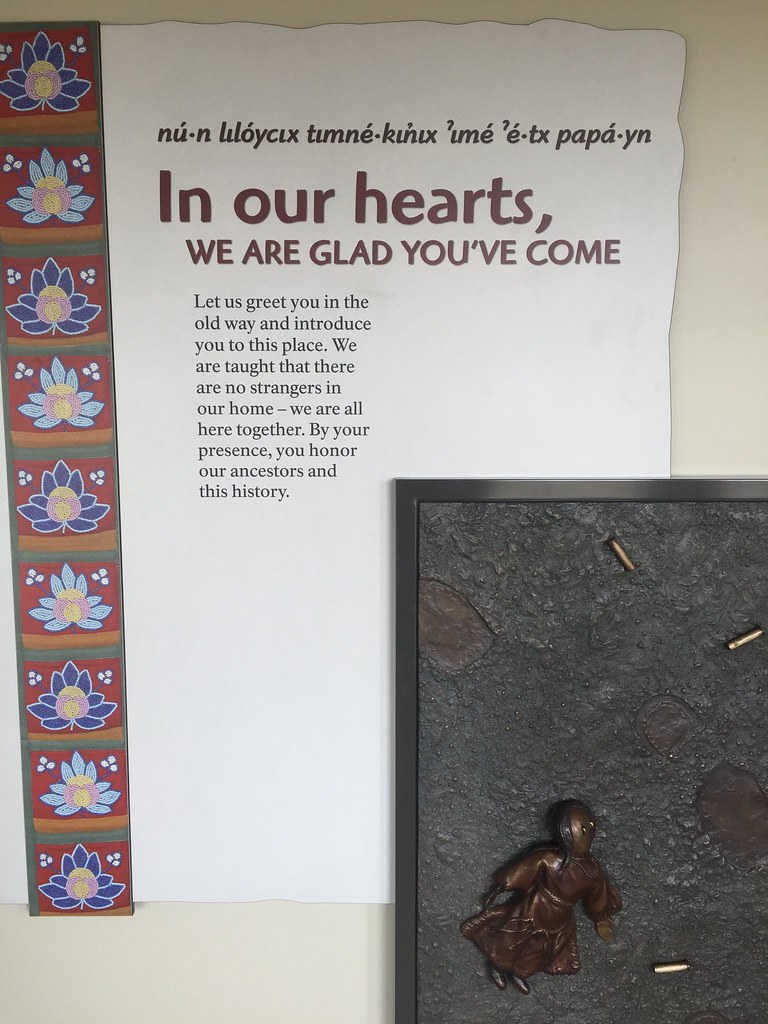 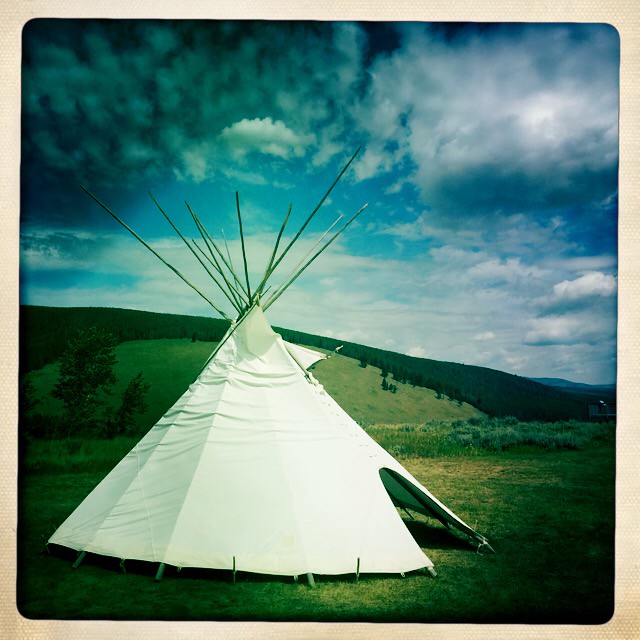 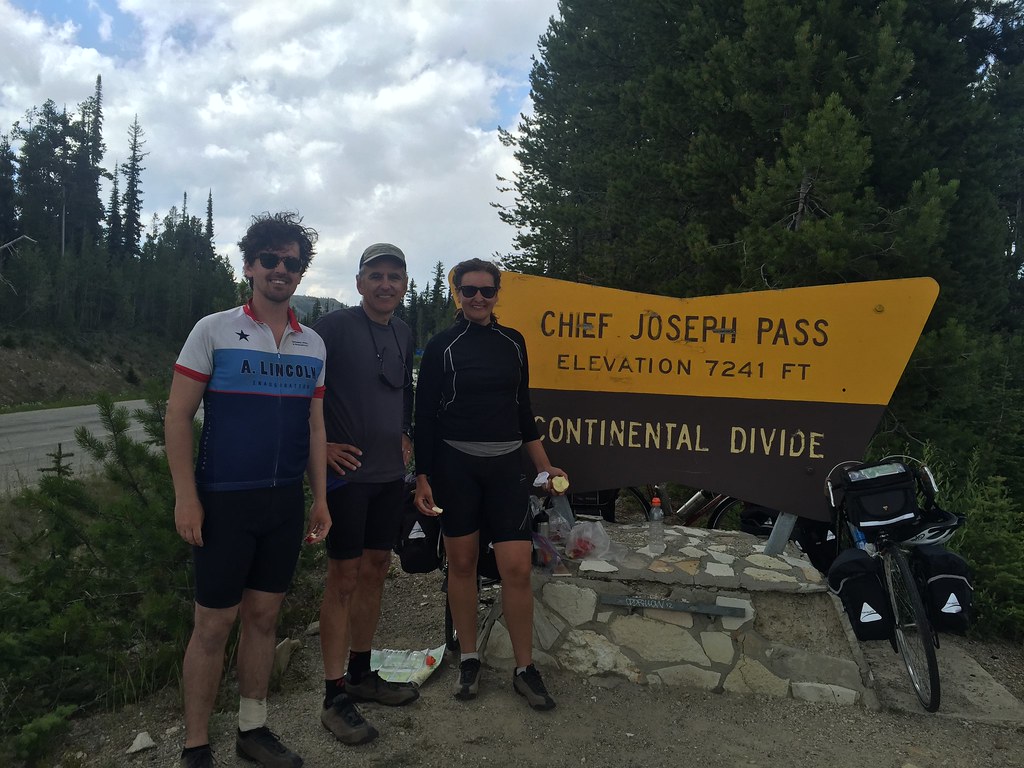 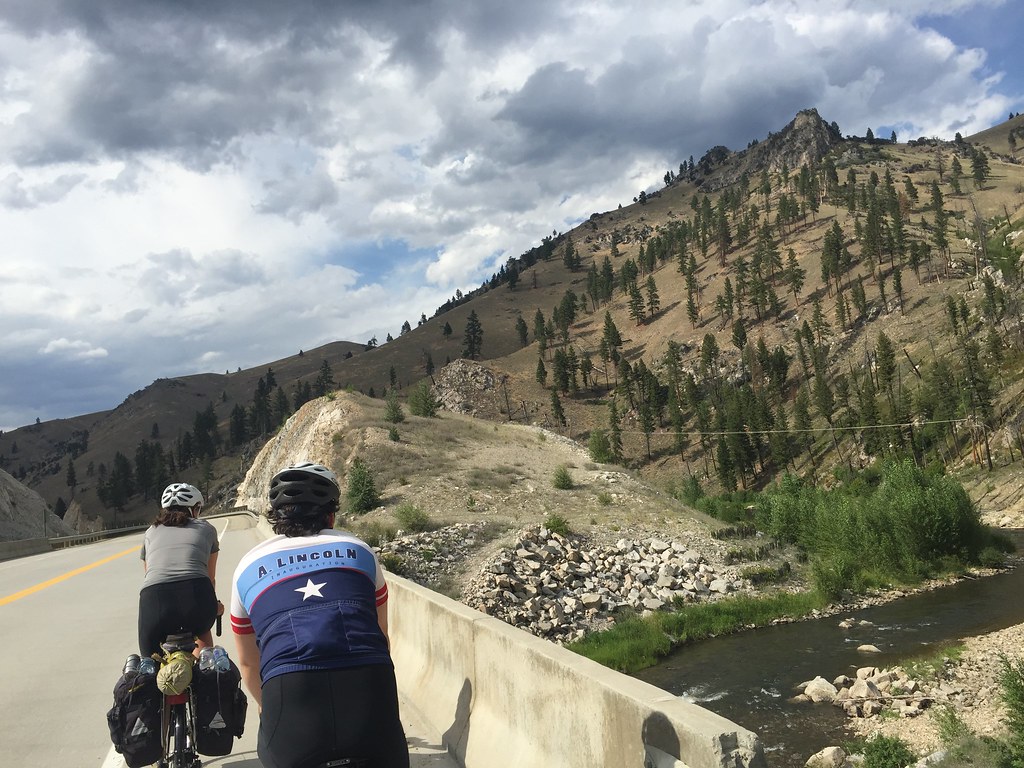 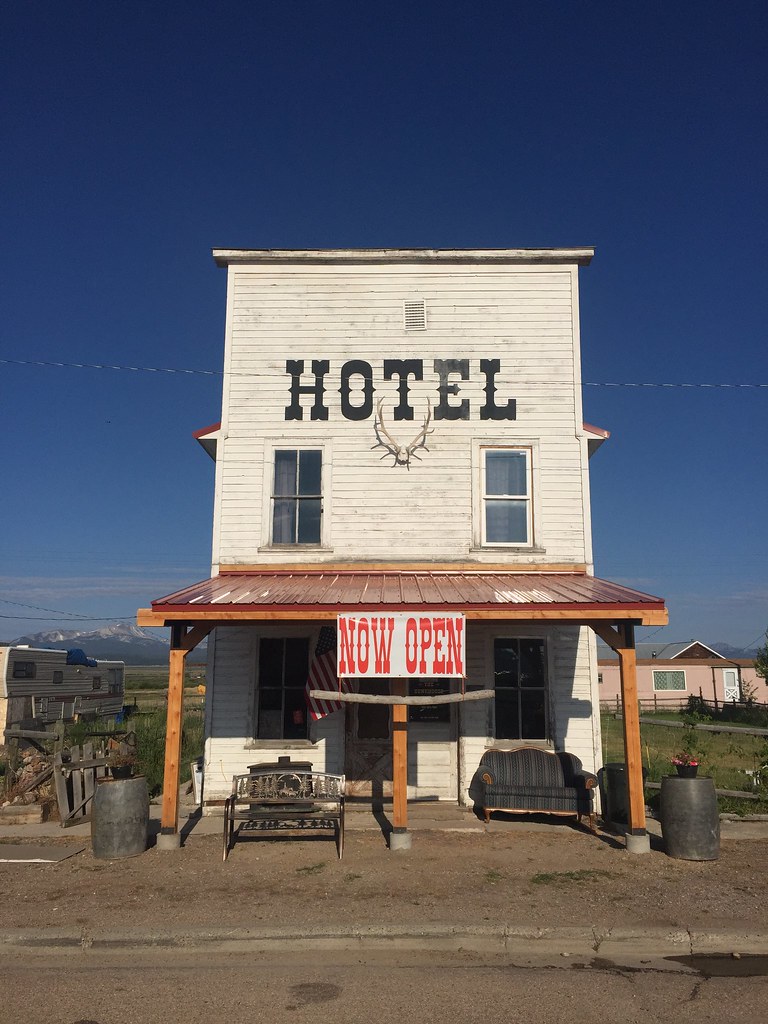 Day 35, July 25
75 miles, Darby, MT
Leaving Jackson this morning was very chilly as we are at 6000′ or so in elevation. The high country gets pretty cold at night and this ends up making for a slower start in the morning as we wait for it to warm up. The landscape was vast and open range land with an epic backdrop of the Bitterroot Mountains. We kept seeing eagle nests in the morning situated on top of telephone poles as we were riding. The Big Hole River meanders through the valley creating a wetland that looks ideal for all sorts of game and trout fishing. The views are once again vast and open. As we approach the town of Wisdom we are getting more used to towns of population 100 being good places to resupply. The countryside is so big and this spreads out the population remotely across the state. Not that far away is the Big Hole National Battlefield National Park. This is the tragic location of the plight of the Nez Perce Indians and the legacy of Chief Joseph. As the native people were promised a reservation and self determination, the discovery of gold on their land once again led to a violation of the treaties. A forced relocation in 30 days was demanded at a difficult time of the year (when the Snake River was at a high point) and the tribe tried to gather as much of their livestock as possible. The tension of this demand was met with resistance and violence. Similar to the problems that occurred with the Dakota uprising in Minnesota, there were various political factions in the Nez Perce bands that didn’t speak with a homogenous voice. This became a tinderbox and some of the settlers on the frontier were attacked and the army was called out to subdue the entire tribe,- treaty or non treaty natives. Chief Joseph, like Sitting Bull was forced to constantly avoid a counter attack by fleeing with his people to Canada. The same General Gibbon that was turned back by Crazy Horse in southeast Montana ended up attacking a camp of Looking Glass at Big Hole River and a fire fight ensued where men, women, and children were shot indiscriminately. The area today is marked by tepee poles set into a village without the hides stretched over the structures rendering what looks like an empty ghost village. The site is recognized as a sacred site by the contemporary Nez Perce and every year they hold a reconciliation ceremony at the site. A native Nez Perce woman gave a talk at the site today and she made a point in her presentation to share a positive aspect of her tribal legacy,- after her introduction, she ended up showing us how to play ‘the stick game’ that her people still enjoy today. The efforts by the tribes in some of the areas of historic trauma was so magnanimous and inspirational to see in their gestures of reconciliation and healing.

As we moved further west we entered the Beaverhead National Forest. This area is a very remote wilderness and definitely bear country. This kept us very aware of our surroundings more than usual especially as we passed through secondary growth foliage next to excellent trout fishing beds and streams. Gradually gaining elevation, we climbed up and eventually reached the Continental Divide at Chief Joseph Pass over 7000′. As we rode further, the route shifted into Idaho briefly and then back into Montana. Our descent again gave us more epic views looking out over the Bitterroot Mountains. This time the landscape was heavily forested with Lodgepole and Ponderosa Pines. We extended our day 20 more miles due to the downhill run of about 30 miles to Darby. 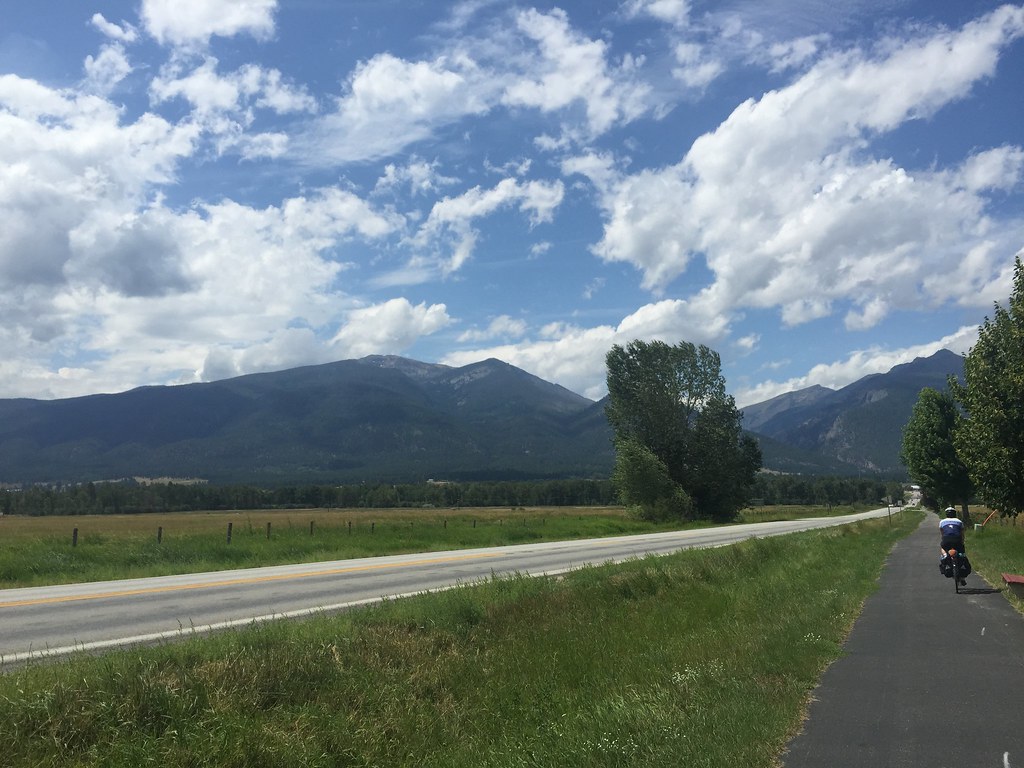 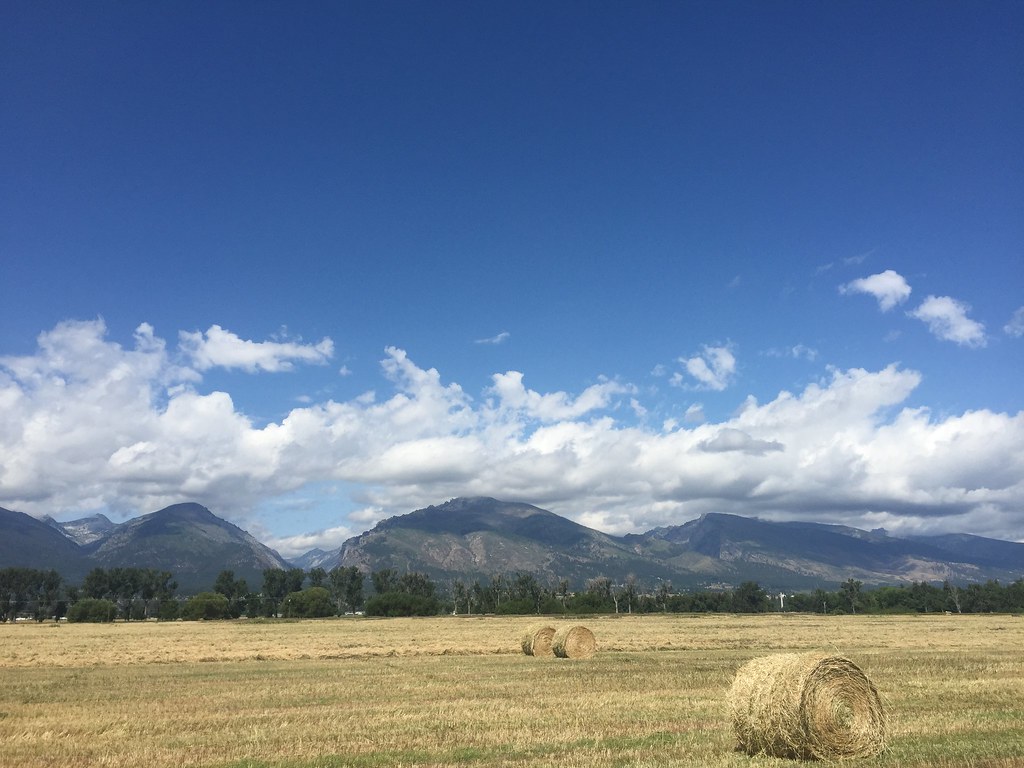 Day 36, July 26
65 miles, Missoula, MT
When we left this morning our destination was Stevensville but we arrived soon and decided to press on to Missoula. Not seeing a good place to camp, we rode on to our rest day location 2 days in advance. This will give us 4 days to explore the town and get ready for our ride into Idaho. The route we are following at this point has veered slightly north of the original Lewis and Clark trail. Our journey from Missoula through Lolo Pass in Idaho actually will follow the path of the Nez Perce as they were evading their captors. Our journey up to Missoula and through Gibbons Pass a couple of days ago also followed his route in the opposite direction. Fleeing their original homelands due to the discovery of gold, the Nez Perce were on the move looking for a more peaceful place to live. As they crossed Lolo Pass in Idaho, they moved up towards Missoula and south through the Bitterroot Valley passing through Yellowstone Park. They eventually were stopped just 40 miles south of the Canadian border seeking refuge. The skill of Chief Joseph’s negotiation abilities were the topic of popular newspaper articles in the 19th century and he had developed quite a reputation as a humanitarian. Though he pleaded his case throughout his life, the Nez Perce were never allowed to move back to their original homeland.