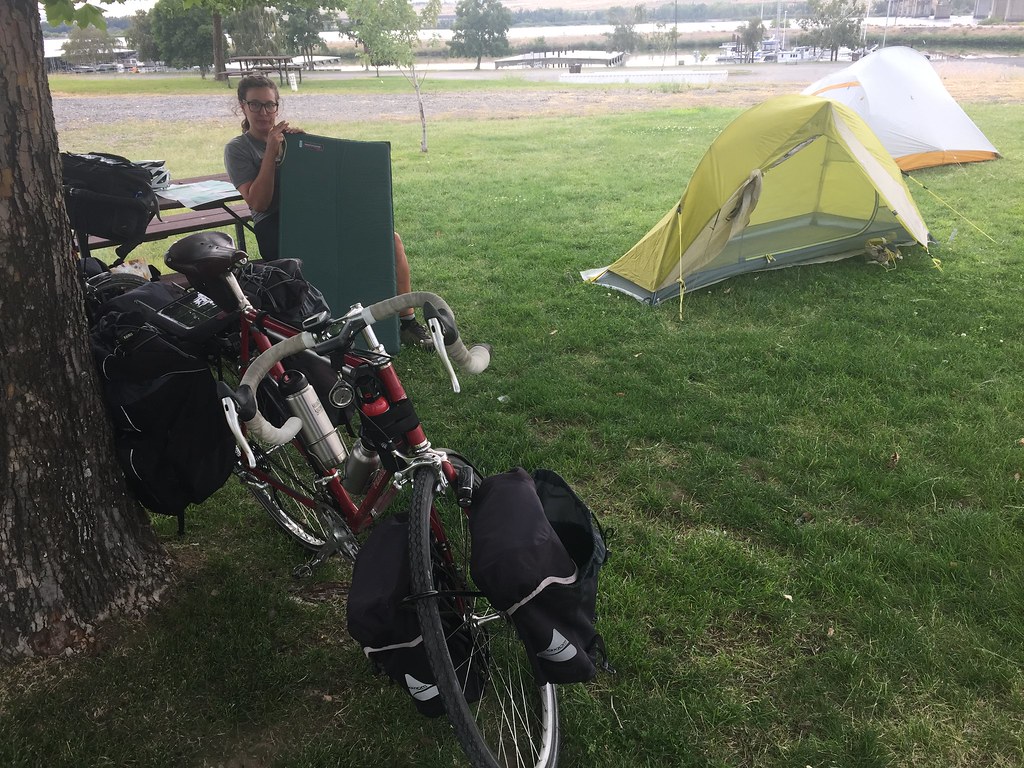 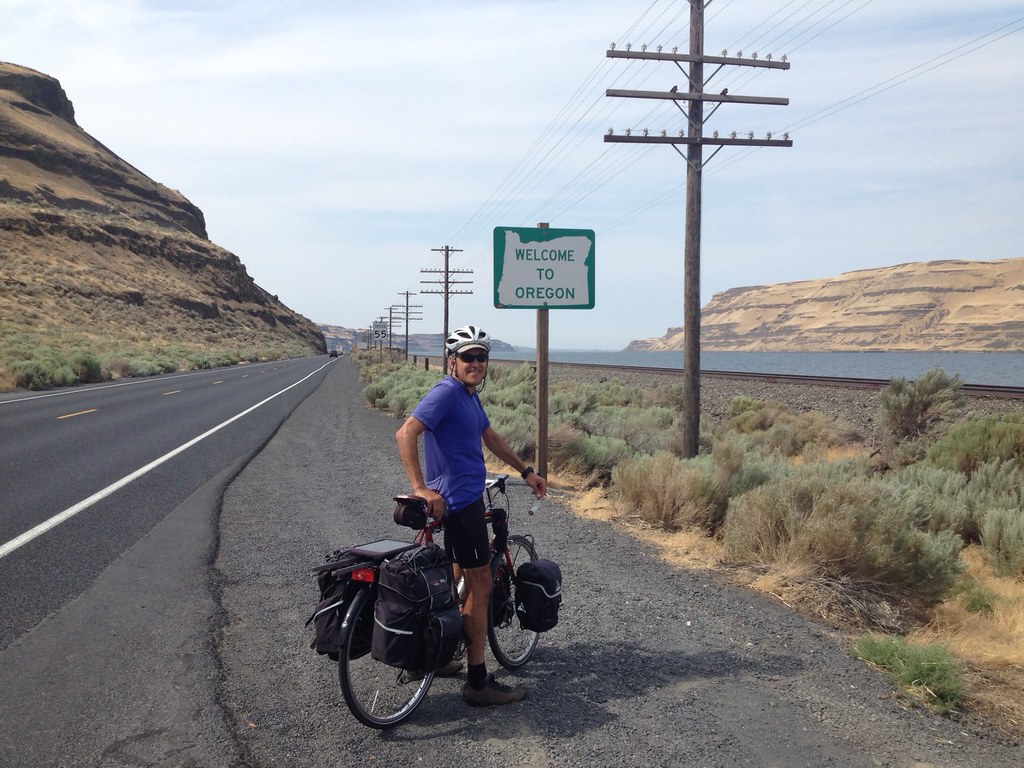 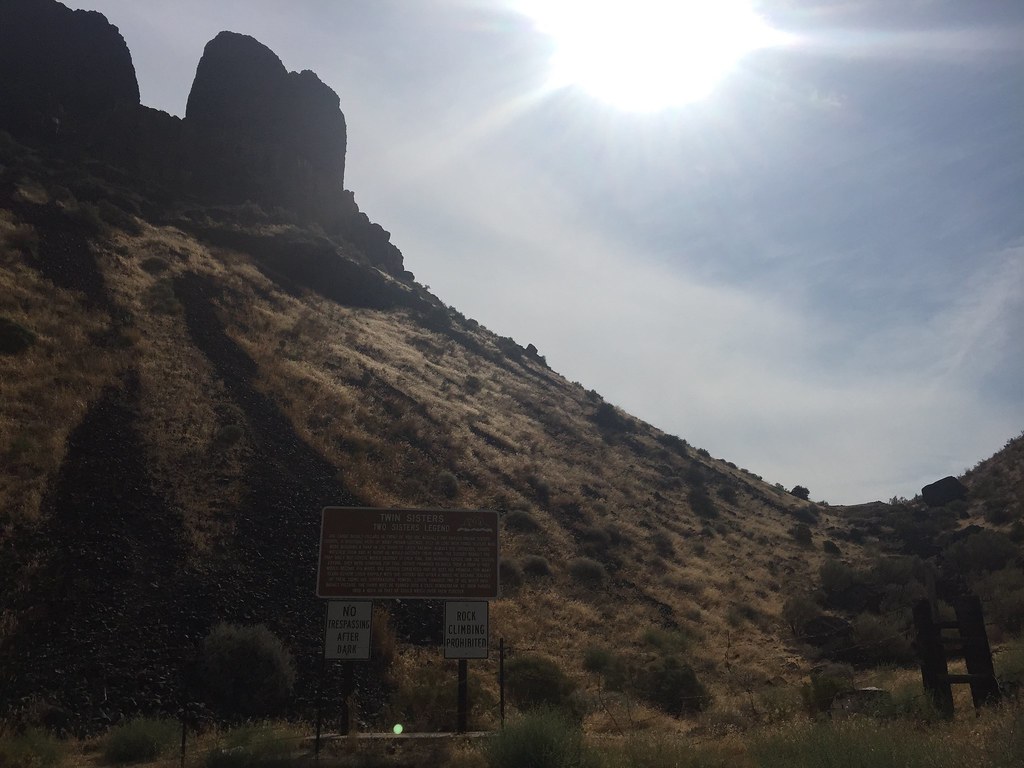 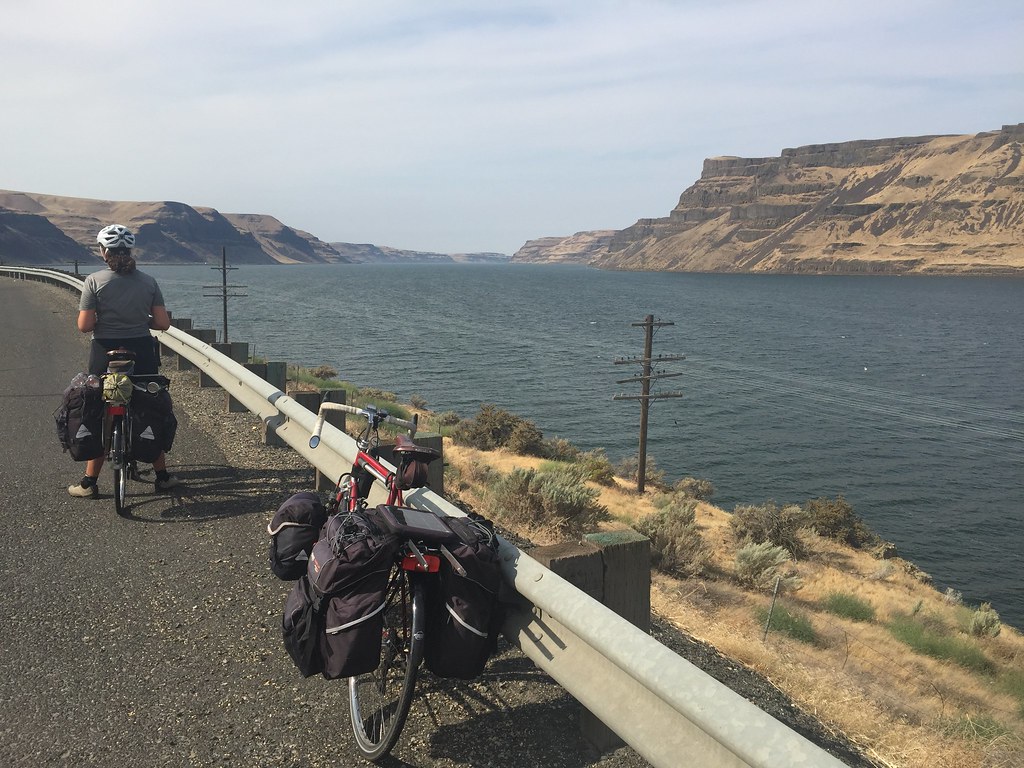 Day 51, August 10
55 miles, Umatilla, OR
Today we once again left town and ventured into what looked like a desert. As we rode west into the countryside, we were met with a slight cooling breeze in the early morning. The early departures usually makes for cooler temperatures and mild winds. As we wound our way southwest, we entered the Columbia River landscape. The wind immediately picked up but we were thankful it stayed fairly calm all day. We have been warned of the big gusts that can come the Gorge from the Ocean. A 30mph headwind could end up holding us to 30 miles of travel in this area. At this leg of the journey, we are following Lewis and Clark’s westward and return journey routes. As soon as we passed Hat Rock State Park, both paths are identical. We have a couple more days before we should start to see green in the gorge area. Tomorrow, we will cross over into Washington for the next day and a half and then cross back into Oregon due to the availability of supplies. It is still pretty remote were we are traveling and tomorrow night we will make camp west of Roosevelt at the Corps of Engineering site on the river and have to carry food and water for a couple of meals. 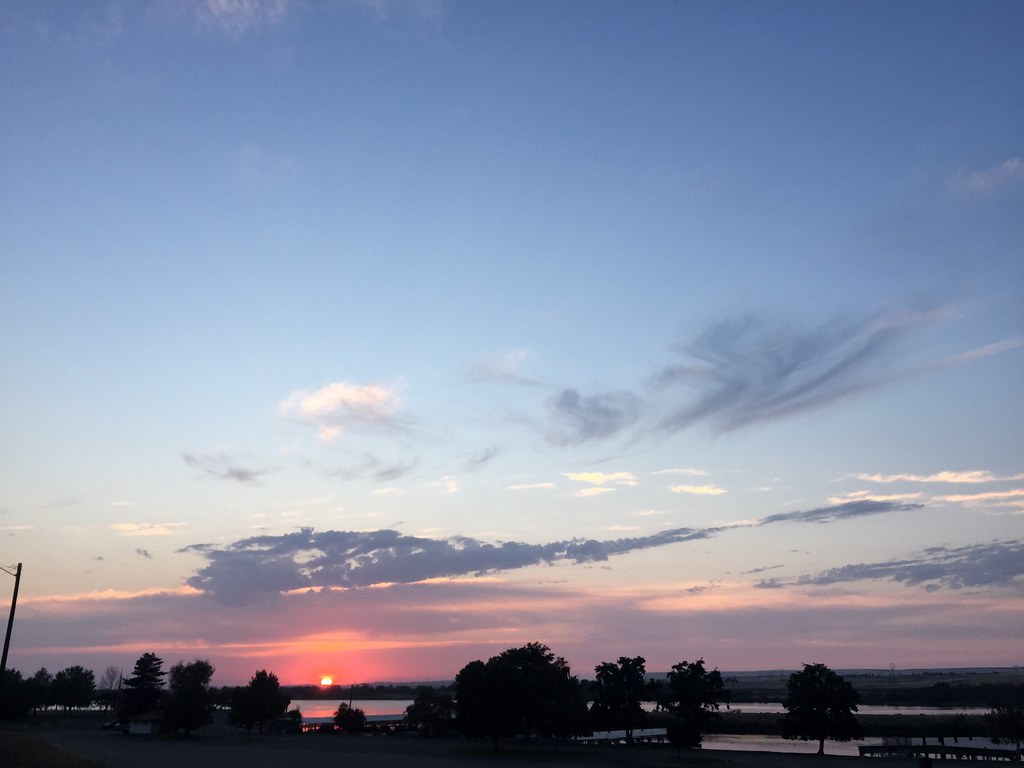 Day 52, August 11
Delay, Umatilla, OR
Delayed and waiting for other riders to join us. 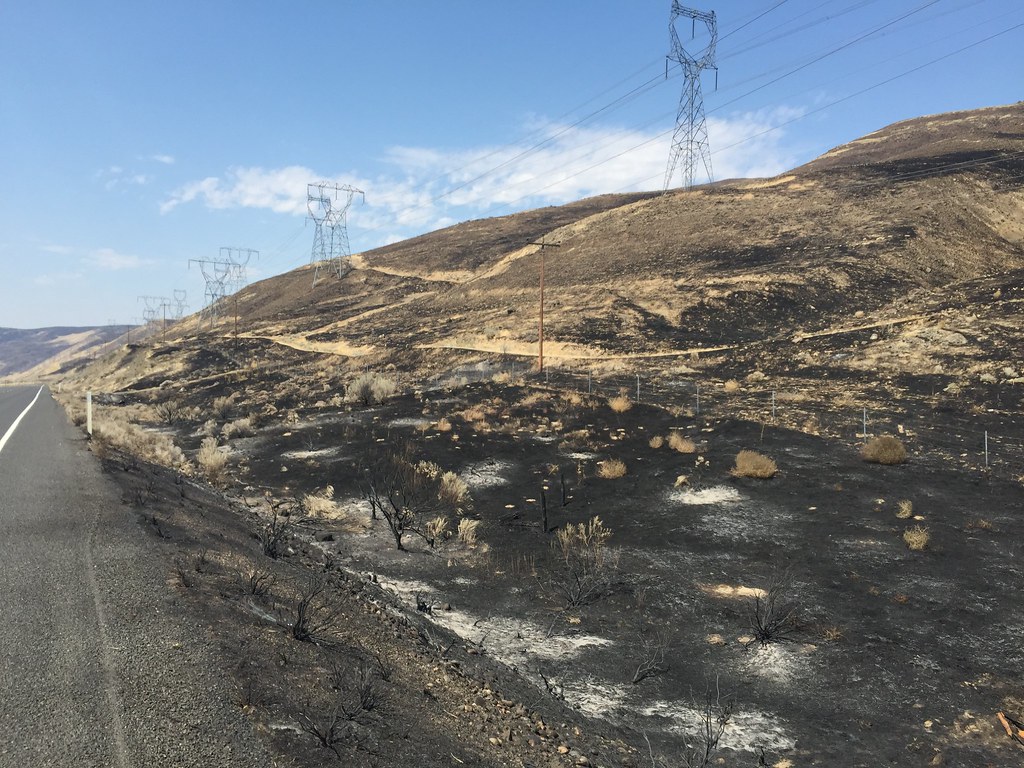 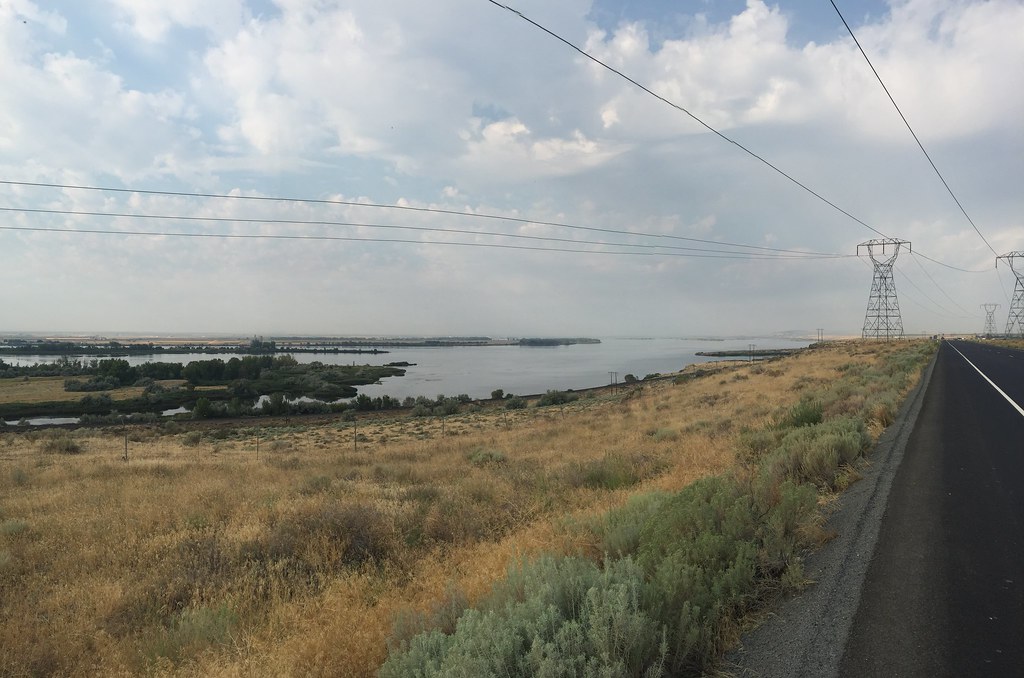 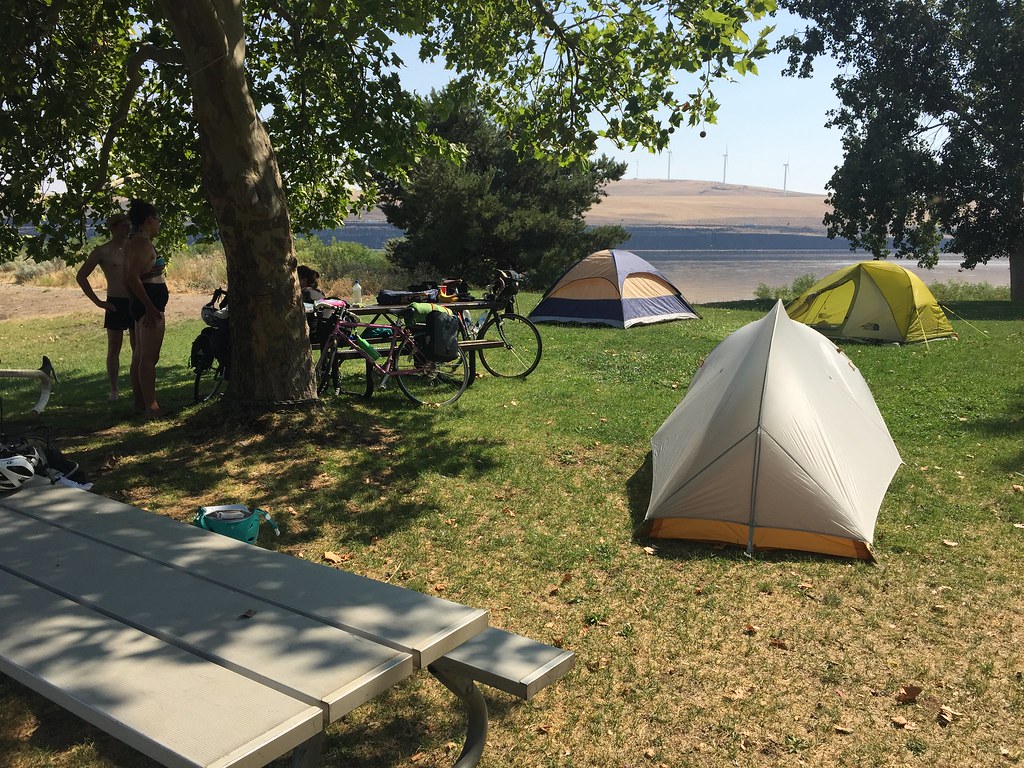 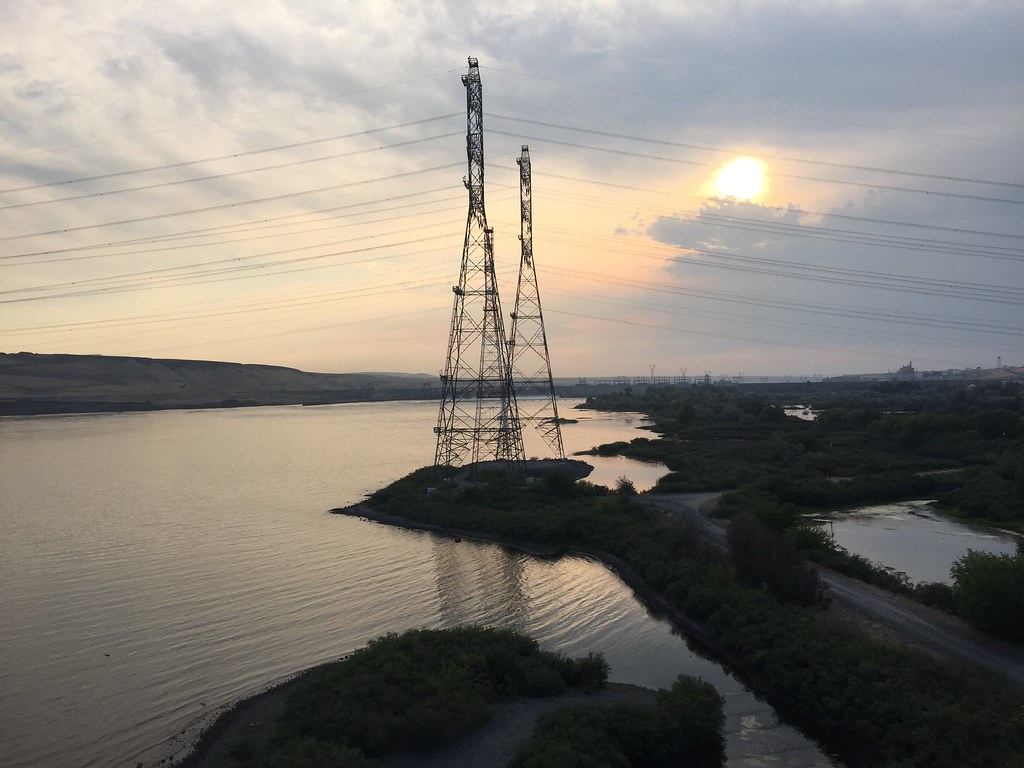 Day 53, August 12
50 miles, Roosevelt, WA
Today we rode through a burn area in Roosevelt, Washington. Thousands of acres of fire were just put out last week when the town was ordered evacuated. The fire is technically 95% contained so there are still fire crews in the area and the ground seems to be giving off heat especially in the ashen area. The diner where we are has burned ground just 50 feet away. The devastating impact of a fire storm is really taken serious out here and the wind in the Columbia River zone can make it even worse. Another layer of respect for the landscape occurs when we see how vulnerable one can be in this rugged landscape. The days here are hot and very dry and again a red flag warning day is issued. That means fire precaution is high and lightening strikes can occur and ignite a whole valley. Where are camp is is pretty safe as there is nothing more to burn and the river is to our south. 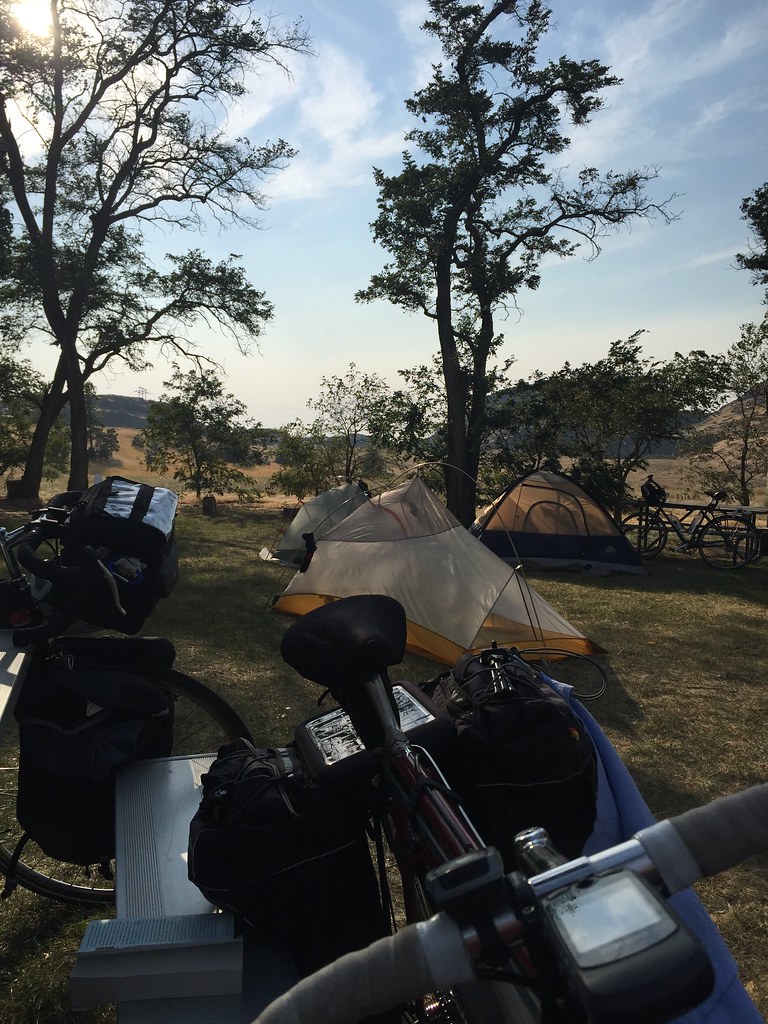 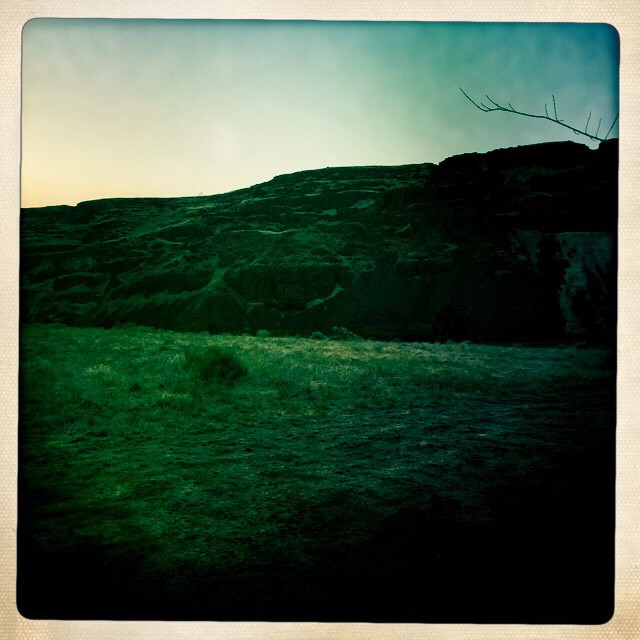 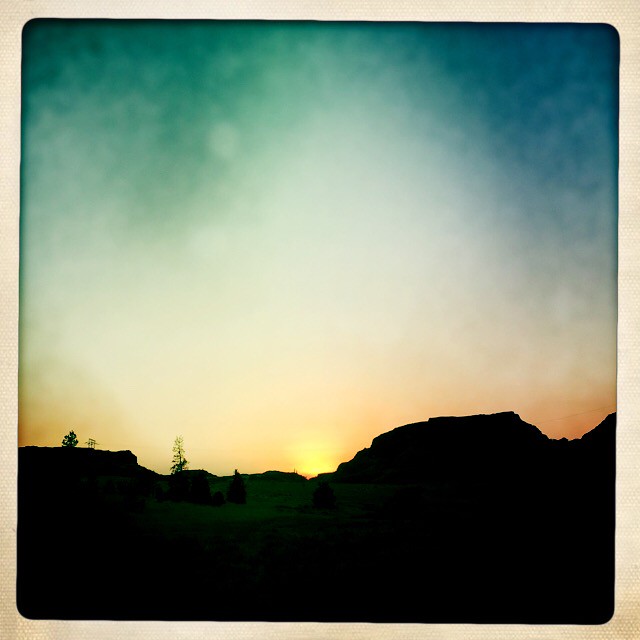 Day 54, August 13
48 miles, Horse Thief State Park, (Dallesport), WA
Leaving the burn area brought us to other burn areas as we made our way west down the Columbia River. The elevation is dropping and the air is getting damper but we are still in a desert climate. This does not however, mean that we don’t still have to climb. The dryness has led to another Red Flag Fire Alert day in this area. The temperature climbed to 100 today and we try to stay hydrated. The goal in this situation is to put on as much mileage before noon as possible. Throughout the day we are seeing more and more deciduous trees and vineyards. The area is getting greener. The wind started to pick up today and it is now actually blowing constantly at 15-18mph form the west down the Columbia River Gorge. Usually at night it dies down but we are looking at the situation to stay consistent all night and actually start to climb to 30mph by noon with headwind gusts of up to 40mph. We are only 90 miles from Portland but our day could be significantly shortened due to the weather. The Gorge we viewed from the Washington side is quite dramatic and the rock formations and points make this area look like the Grand Canyon almost. We might try to make 20 miles tomorrow before any other winds build. 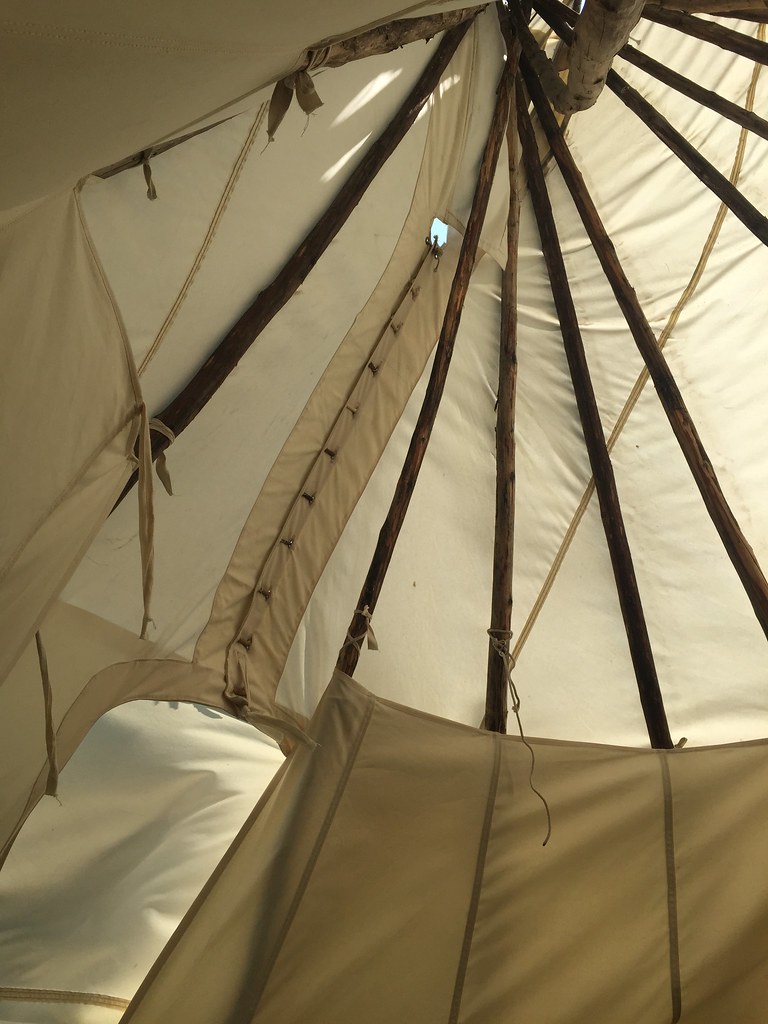 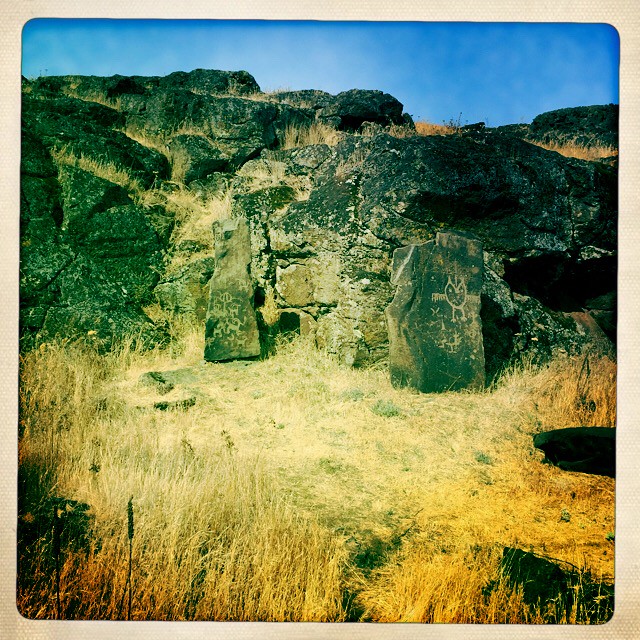 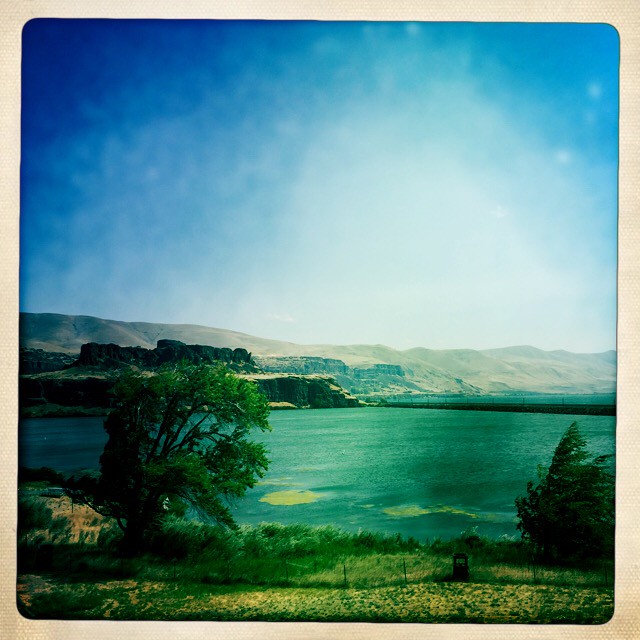 Day 55, August 14
Wind Advisory Delay, Horse Thief State Park, (Dallesport), WA
Today we were forced to stay in camp another day due to the high wind advisory. All night the winds have been blowing a constant 20mph from the west and today they are building. The gusts are 30-40mph and the dryness can create dust storms. The temperature has dropped but the constant wind make travel impossible. The Gorge has moments when the conditions are right, the winds pickup speed as they travel inland down this long tunnel of rock from the Ocean.
Seeing the area at this site where Lewis and Clark camped makes me think about how many delays they must have experience. Paddling up stream at this point is like pushing against a tide. The river narrows down in a spot not far from here and that creates a rapids of white water. The Native people also gathered here and there are traditional campsites throughout the region. There are also fishing zones where scaffolding was set up to harvest the salmon. Not far from our site, ancient petroglyphs align along a short walk along a small rock wall. These are recognized as ancient messages from the Confederated Tribes of the Umatilla, Yakima, and Nez Perce people and are considered sacred and ceremonial areas. 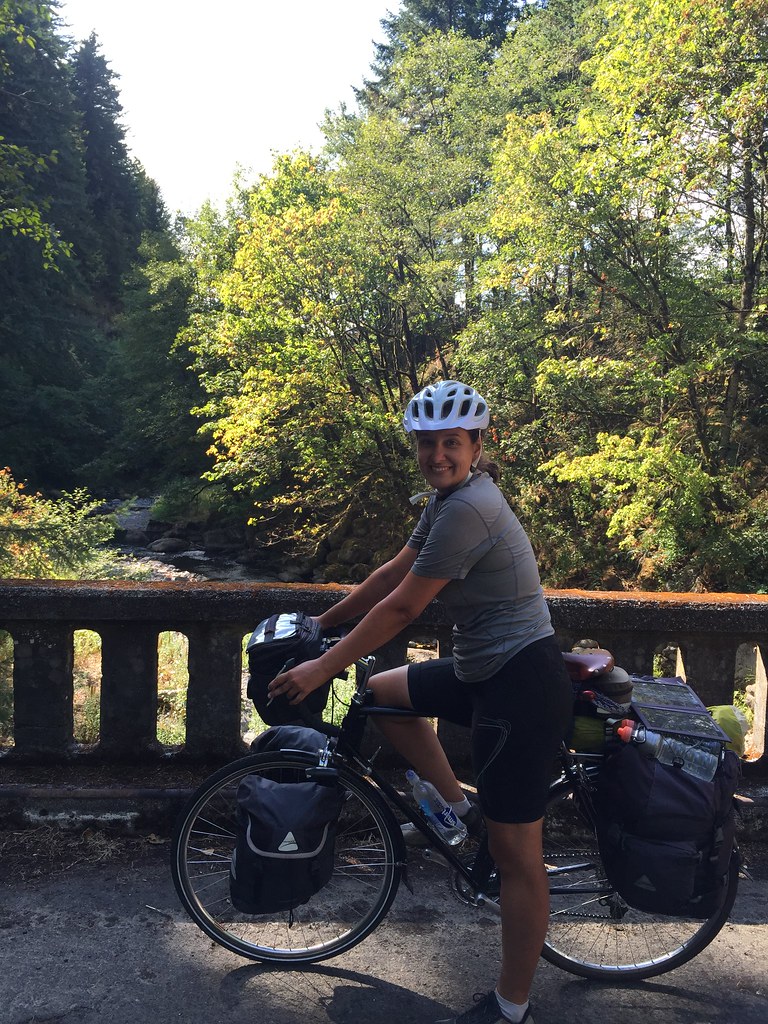 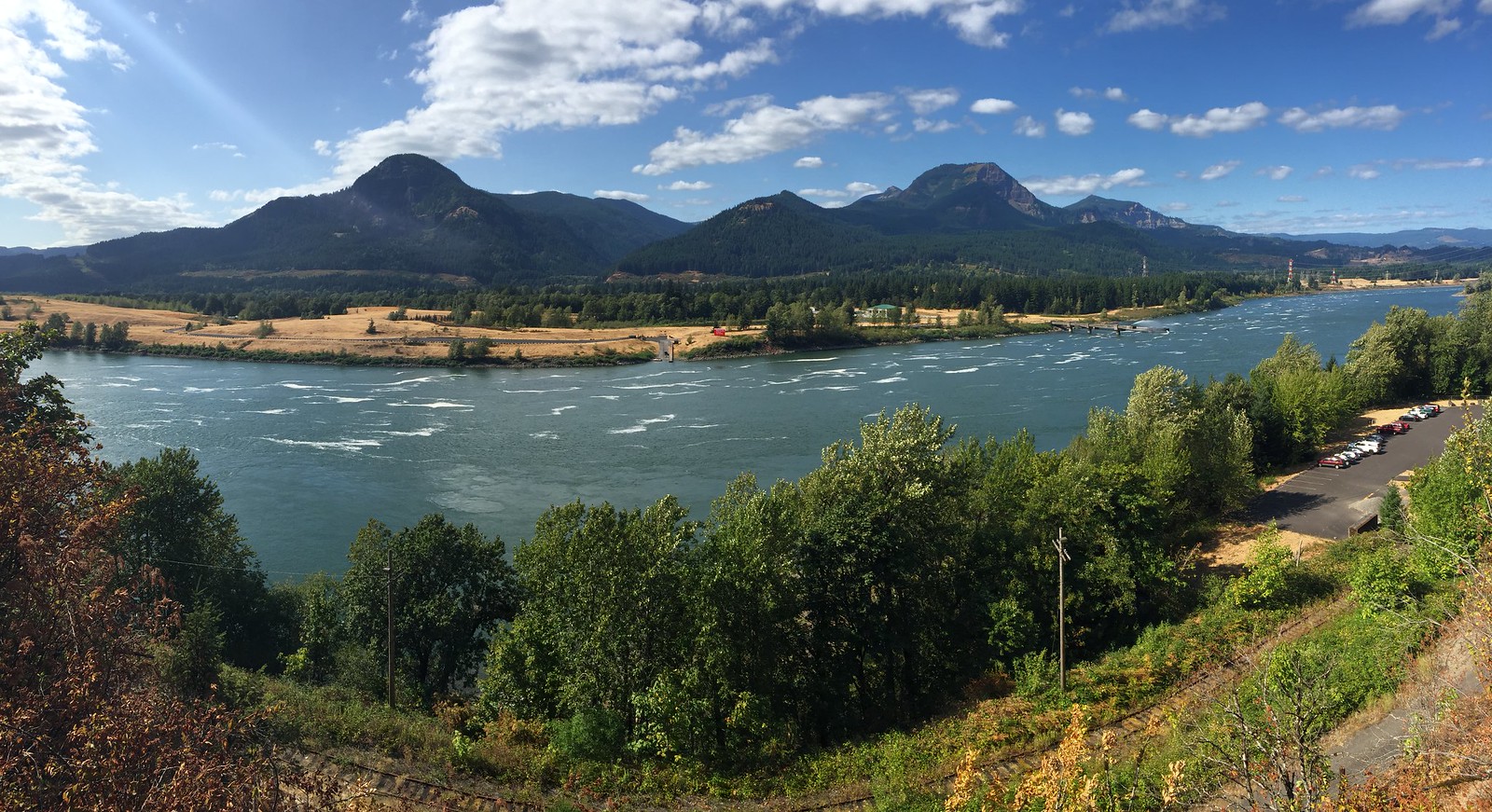 Day 56, August 15
53 miles, Ainsworth State Park, Oregon
Riding out of last night’s camp we finally escaped the high wind speeds. This morning we only had to deal with an 8 or 10mph headwind. Climbing out of the valley where we camped took us over the top of a small rise into a completely different ecosystem. It seemed as if trees and dense forests suddenly appeared throughout the valley. The sky looked like it had more clouds and weather and we could smell the pines. The hillsides were suddenly more densely covered with forests and the further we rode in the morning the foliage and secondary undergrowth got thicker and thicker. We haven’t seen this much green in a 1000 miles. Some of the fir trees look to be over a hundred feet tall. The Columbia River had steady white caps blowing a headwind but we didn’t seem to notice much because the views were so magnificent. Glacial rock formations jutted up along the banks and it appeared that trees sprouted off of every surface. The Gorge is incredibly beautiful and we are still following the Lewis and Clark path at this point to and from the Ocean. On their return trip they were able to make 70miles a day on the water and it’s no wonder due to the strong currents and prevailing winds. We wound through the River’s edge all morning on the Washington side and eventually crossed at the ‘Bridge of the Gods’ to the Oregon side. Travel for the day had been without any significant climbs as we descend towards the Ocean. Up until this day, I couldn’t tell if the Ocean was ever going to appear but today more than ever it seems closer. At this point, we are only about 30 miles east of Portland. 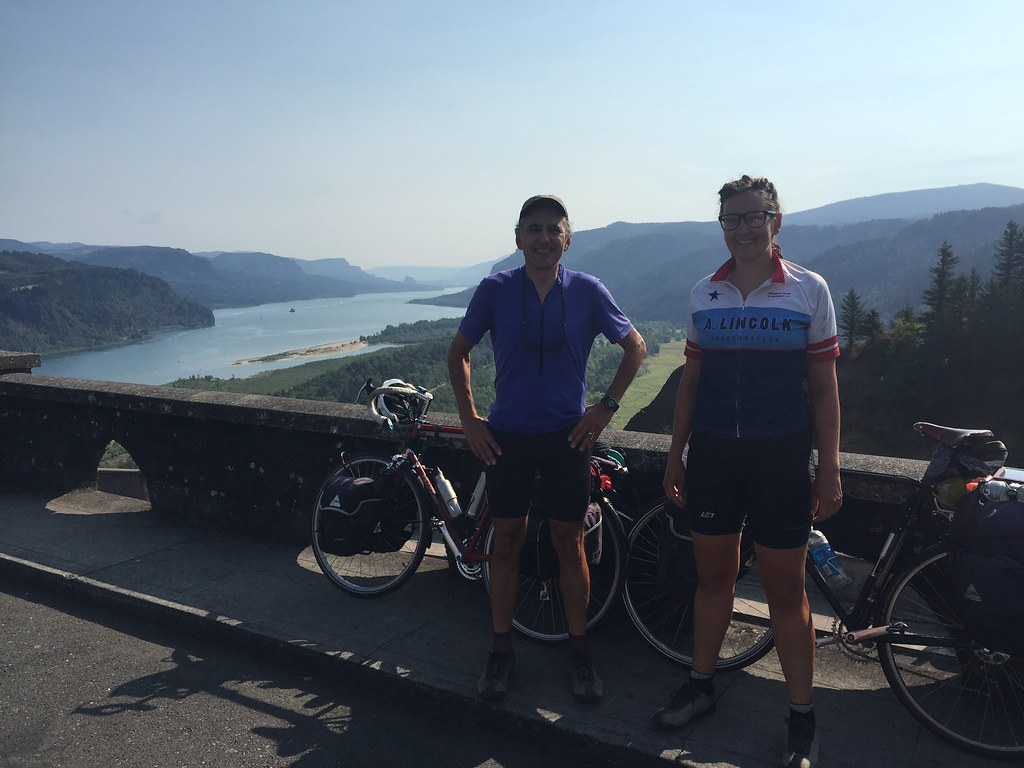 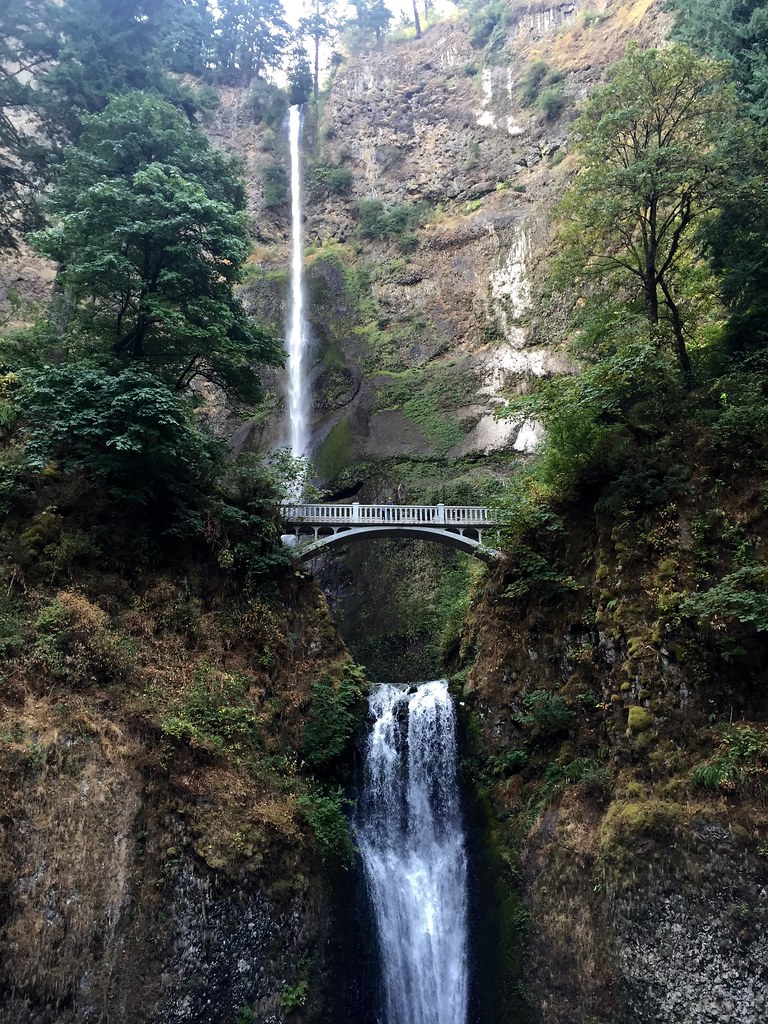 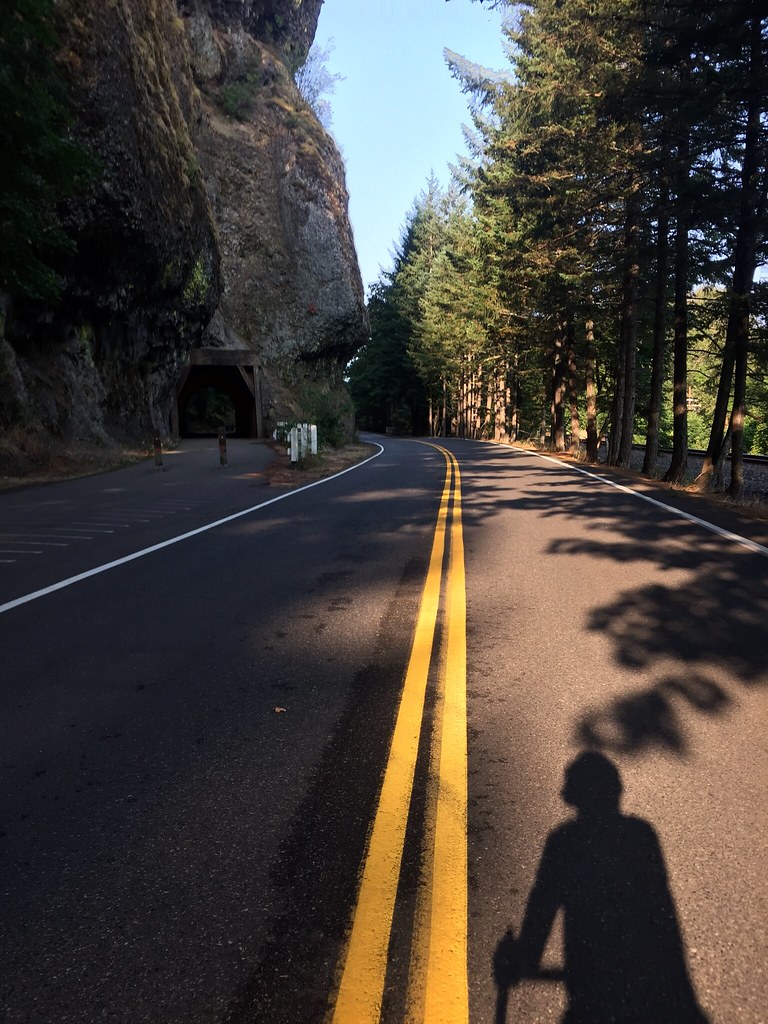 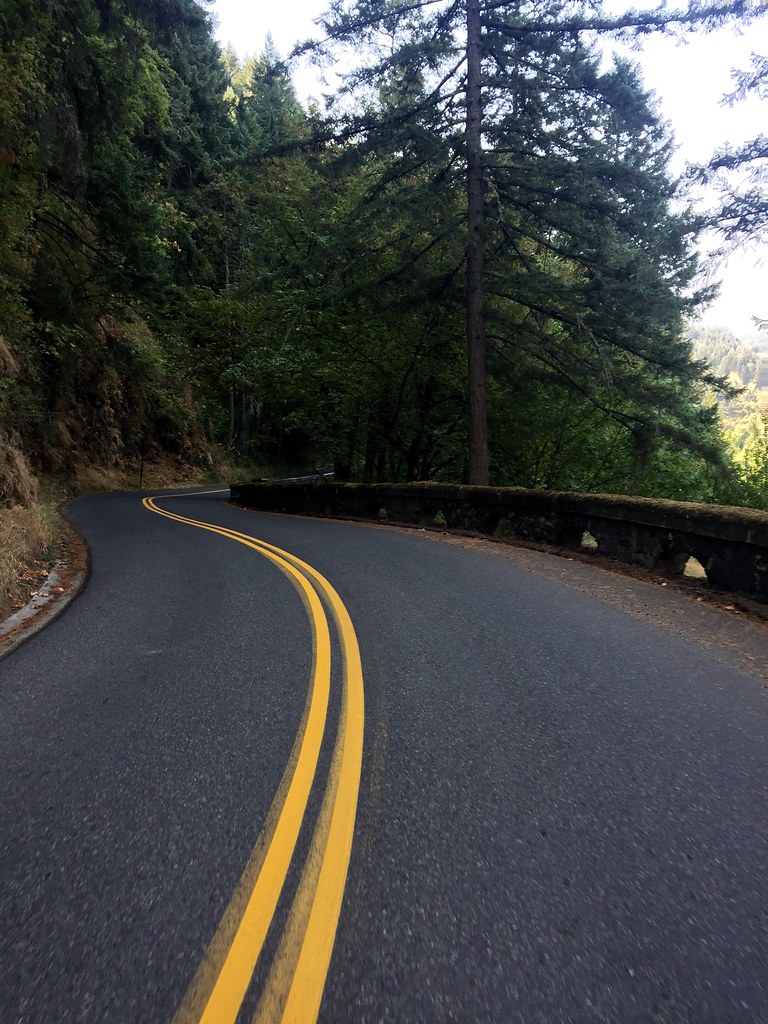 Day 57, August 16
54 miles, Portland, OR
Leaving the Park this morning brought us down old highway 30 and some of the most breath taking scenery we have seen on our trip! Multnomah Falls and other spectacular falls line the route as we ascend through the pass. Our view of the Columbia River Gorge opens up also into a vast expanse. The forest is dense and it still seems so dramatic of a change from the arid land only a few miles away. As we move westward we enter into the Portland area and out to the west end of the town for the night. Tomorrow we make our move towards the coast following the Columbia River to the Ocean. 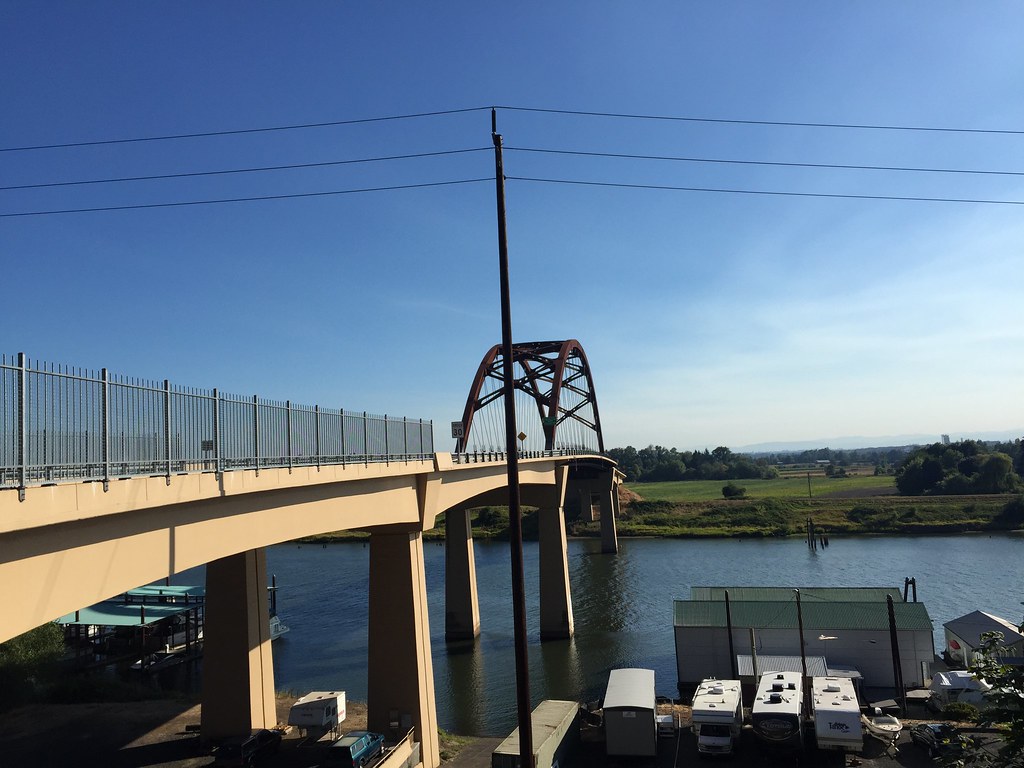 Day 58, August 17
59 miles, Clatskanie, OR
Climbing out of Portland, we followed the Columbia River westward towards the coast. The landscape Lewis and Clark followed here looks almost like the Midwest. The foliage is dense deciduous trees with pines interspersed. We are only about 40 miles from Astoria and I am anticipating the Ocean climate. Earlier in the day, we could see Mt. St. Helens to the east of us. The mountain is actually a volcano that erupted violently in 1980 and lost 15% of its height. It still is active and it defies the ordinary,- I can’t believe the eruption was so dramatic as it killed everything in a 230 square mile area. It seems a bit close for comfort as it passively stands as the most prominent mountain on the horizon. 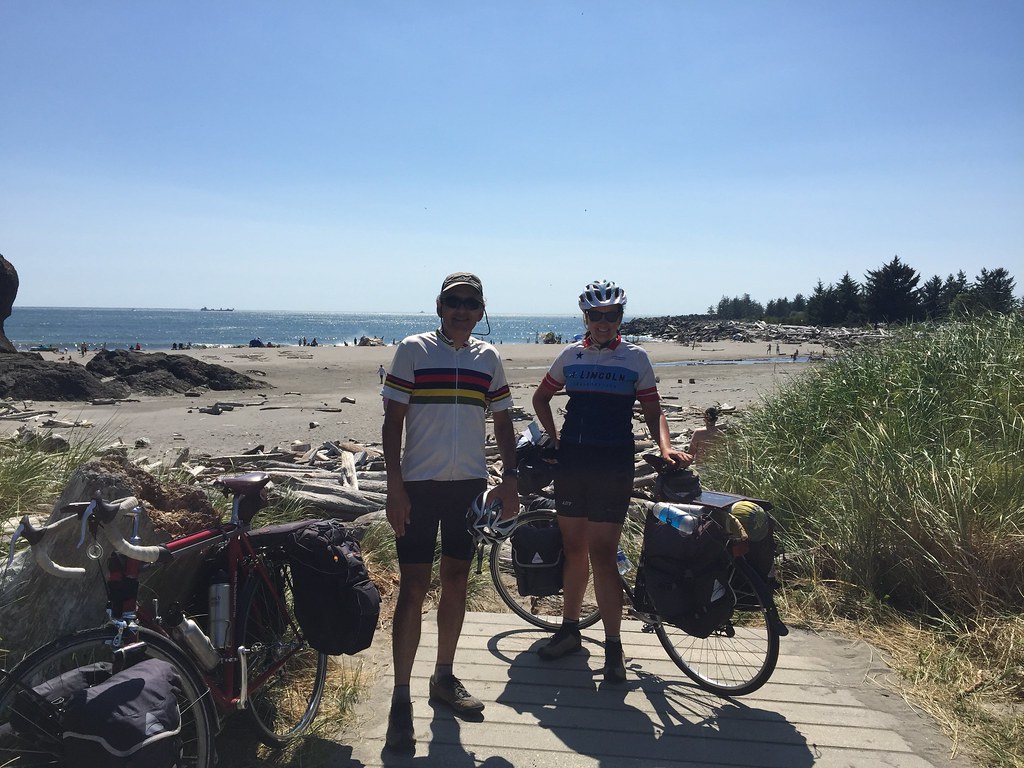 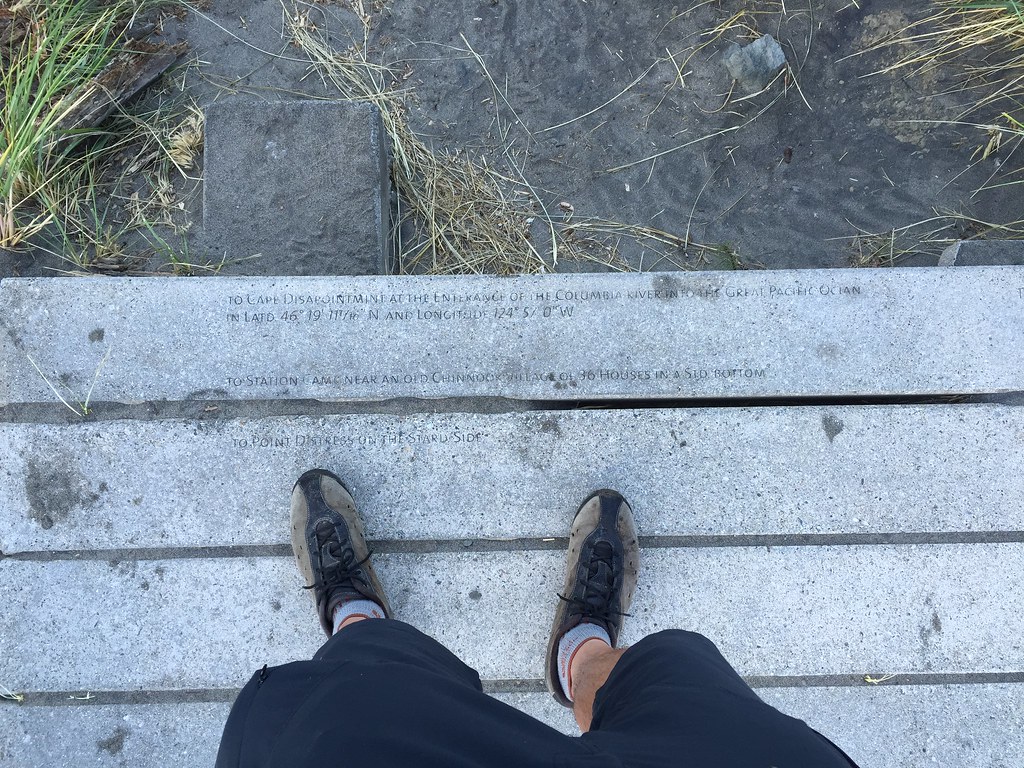 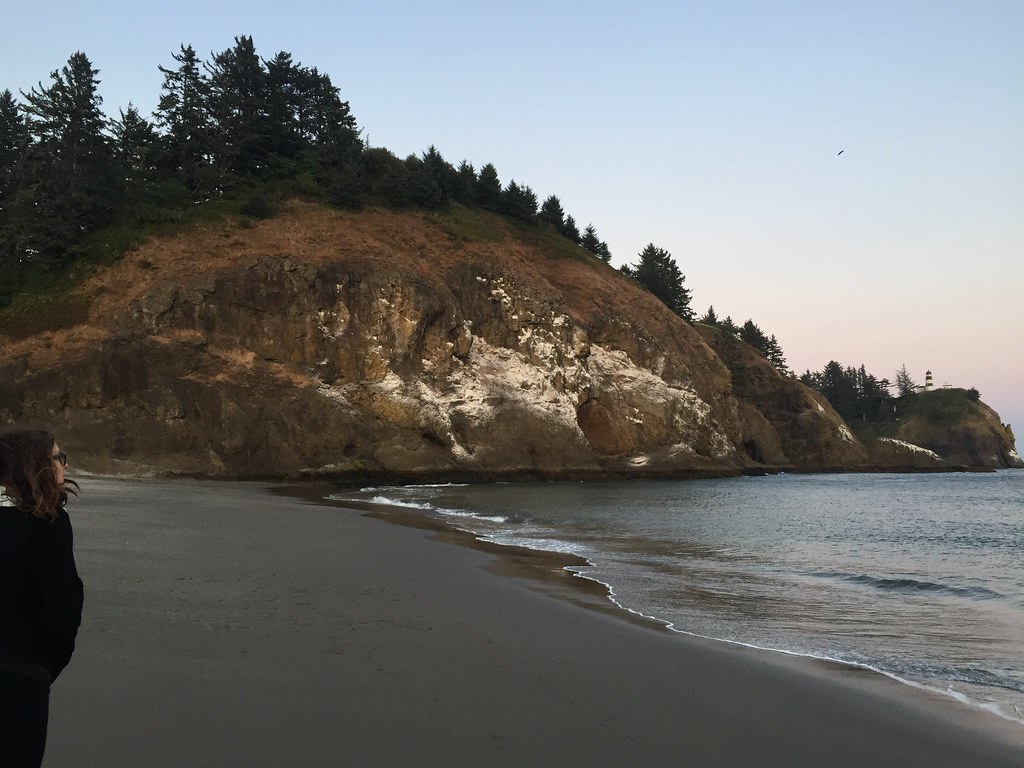 Day 59, August 18
55 miles, Cape Disappointment, Washington
Our last camp today is at the land’s end. We reached Cape Disappointment where Lewis and Clark reached the Pacific Ocean and ended where their epic journey was complete. They explored the Louisiana Purchase and actually moved outside of the US and crossed into Spanish territory when they traveled through the Pacific Northwest. Jefferson tacitly conversed with Spain and framed this as an exploratory mapping mission so as to not arouse expansionist suspicions. The Corps of Discovery wintered at Fort Clatsop on the Oregon side and actually boiled seawater at Seaside to obtain salt for currying their Winter preserves and to prepare for the journey home. Their winter was cold and rainy. Our stay at the moment is unseasonably dry and its is a cloudless and sunny day. Today is a perfect day to end our journey across country! We will set our final marker in the area and take the GPS coordinates for the final time to mark our Journey of Reconciliation with the landscape and history of the Corps of Discovery.

We would like to thank my wife Amy Pollack for her loving help to make all of this possible and to support Julia and myself in this endeavor!, and thanks to the Illinois riders, Adrian Down and Quincy Stewart,- the Montana riders, Anders Pollack, Mark Cleveland, and Pat Cleveland,- and the Washington riders, Matt Harlin and Gretchen Johnson.
This journey will be followed by a concluding exhibition of paintings, information graphics, and experimental sound works in Chicago, Illinois at a date in the near future.